Volkswagen unveiled the new sixth-generation Polo at an event in Berlin. With more than 14 million units sold to date, the Polo is one of the world’s most successful compact cars. The sixth generation has a fully new sportier exterior design, and is bigger than its predecessor in every dimension.

In many parts of Europe the new Polo is due to launch before the year is out, with a number of Euro 6 engines being used phase by phase. The range of power output options at the start of sales will extend from 48 kW / 65 PS to 110 kW / 150 PS. For the first time, the Polo will be available with a natural gas engine—the newly developed 1.0 TGI with an output of 66 kW / 90 PS.

In addition, there will be a choice of four gasoline and two diesel engines, all equipped as standard with a start/stop system and regenerative braking mode. Both TDI models have an SCR catalytic converter. Every engine with a power output of 70 kW or above can be combined with a dual clutch gearbox (DSG).

ADAS and HMI. Volkswagen has integrated a new generation of assistance systems into the Polo. These are systems which were adapted from larger car classes and are being further democratized by their use in the Polo.

The optional Keyless Access locking and engine starting system, which is also new, can be used to unlock and start up the Polo. 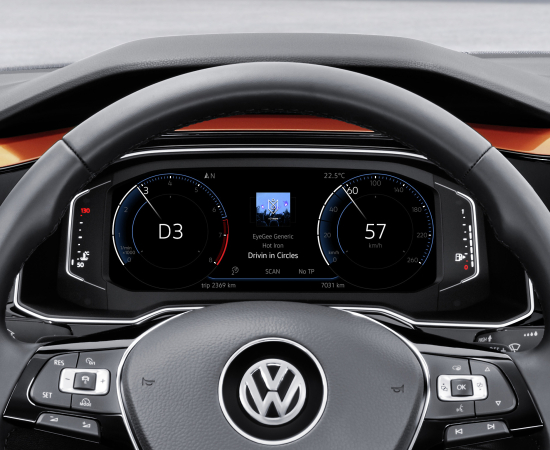 In addition, the Polo is the first Volkswagen and first Group model at all in which a new generation of the Active Info Display is available. The functionality and ease of use of the digital instruments are something completely new in this segment. At the same time, the Polo has been given the latest generation of infotainment systems with display diagonals ranging from 6.5 to 8.0 inches.

Instantiating the strategy. The new Polo was developed based on the latest Volkswagen brand strategy with its four fields of innovation:

I would rather know the performance (mpg mph gms CO2) than the size of the infotainment screen.
I suppose it is too soon for than - won't know till they are ready for market.

Having been burned by the rip-off crooks at SEVERAL VW dealers in Connecticut, and then royally screwed with a 2010 Jetta TDI Sportwagen, I am firmly in the 'never again' camp on VW.

I now drive a Toyota Prius Prime, which I love! I drive it most of the time in electric only mode, and since buying the car March 3rd 2017 I've used 2 tanks of gas!
But I really like VW's move here. Natural gas is plentyful and very cheap. It burns very cleanly.

What I would really like to see would be a 2 cylinder OPOC hybrid setup. That would be tough to beat and would use existing technology. However, if it comes from VW I will never buy it. The dealers are crooks.

no, still got it wrong.... I meant to say "2 cylinder OPOC natural gas HYBRID setup'.

I'm such a jerk

This hatchback without a CUV version looks so 20th century to my eyes.

Unfortunately natural gas is just another highly polluting fossil fuel which needs to stay in the ground.
By all means fuel it with a renewable gas or liquid.
Needs a plug and enough battery for the owners daily commute.
Nothing green to be seen here at the moment.

Bio DME would work it is renewable.

Natural gas is cleaner than E85 and gasoline; at least at the dealer’s office. After a while, its catalyst deteriorates and methane emissions will increase. Most of the HC is methane. Could we live with that? Well, methane is not harmful to human health. We produce it ourselves. However, methane contributes to climate change. The fact that methane contains less carbon per energy equivalent than gasoline is negated by methane emissions that have higher GWP than carbon dioxide. The outcome is about similar to gasoline over the lifetime of the car. However, climate change is not global. It does not happen in the USA, as we have heard your president say.

I don't see much innovative here. I'm depressed that many of the safety features are excluded from lower versions - while Tesla is adding massive capabilities to all their cars. But good work on standard frontal collision warnings.

VW needs more electrics and more safety or they will just fade with the other car makers.

Agree with Bobcom and others that natural gas is just a slower goodbye to the planet.