Further, a new 7 kW (32A, 230V) charger enables the vehicle’s battery to be fully charged in as little as six hours (easily possible overnight), while a one-hour lunch break allows enough time to add a 35-kilometer (15.5-mile) top-up. 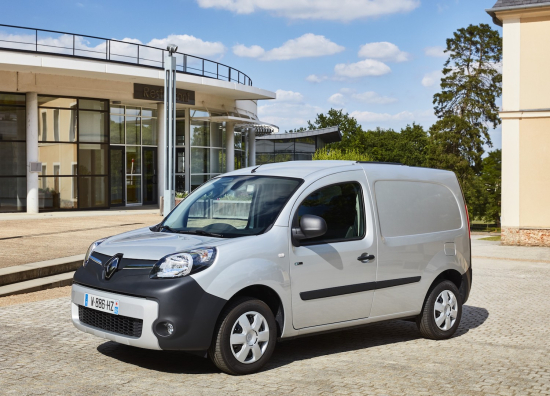 Kangoo Z.E. has topped the European small electric van market for the past six years, achieving sales in excess of 25,000 units since its launch in October 2011. New Kangoo Z.E. is built in France and will be available in Europe from mid-2017.

The new battery, jointly developed by Renault and LG Chem, features increased energy density without and changes to its bulk—the van’s load-carrying capacity is unchanged.

Battery performance was optimized by improving the chemistry of the battery cells in order to increase energy density; the number of modules in the pack did not change. This improvement was achieved with no trade-offs in terms of either reliability, safety or payload.

The all-Renault R60 motor delivers 44kW and is based on the R90 motor that also powers ZOE. The motor is manufactured at Renault’s Cléon plant in France, the Group’s flagship facility for the production of high added-value engines, motors and transmissions.

By using the pre-conditioning system (the trigger time of which can be adjusted via the vehicle’s steering wheel-mounted controls), New Kangoo Z.E. can be heated in advance when plugged in, or cooled (provided it is equipped with climate control).

New Kangoo Z.E. is even capable of catering for the very coldest of climates due to the availability of an additional, independent fuel-powered mini-heater unit that makes sure keeps users comfortable in extreme conditions without impacting driving range.

A smart small van equipped with heat pump and improved batteries and e-motor to improve range at little extra cost (if any)?

A hand for Renault-Nissan?

Yes, all good, including using a fuel based heater if required. While an ICE may only be 30-40% efficient, a heater should be 90+% - keep the electric energy for traction and use HC for simple heat.

While zealots might like more range, 200KM should be enough for most delivery tasks (and they should be able to know in advance).

It is not much, but it is > 0, as long as it did not cost much extra, or cause the van to heat up too much.

I don't see a properly designed solar panel need cause heating esp as for performance it would need to be kept cool.
Xtra benefit would be if parked in sunny place with correct orientation and used less frequently. Also useful for slow charge if stranded.

Much more sensible to install panels to undercover parking shelter.

@Arnold,
OK, so I may have been a bit optimistic wrt the Solar power. It probably depends on how close to the equator you are. It might hold for the south of France and Spain etc, but not Normandy.
The parking shelter panels are a better idea as you state, in terms of total power gathered but this won't be of much use to a delivery van which would hopefully be in use most of the day.

So it is marginal. No-one else seems to be doing it, but the idea has been kicking around for years (I once saw a picture of a Prius covered in cells). However, it could be used as a green flag to price a companies green credentials.