At the Consumer Electronics Show in January, Nissan chairman of the board and chief executive officer Carlos Ghosn announced that the company would launch a new Nissan LEAF with ProPILOT technology (earlier post,) enabling autonomous drive functionality for single-lane highway driving. (Earlier post.) Nissan has now released a teaser image and video of the application of ProPILOT Assist in the new LEAF.

ProPILOT Assist supports drivers by helping control acceleration, braking and steering during single-lane driving on the highway. In the coming years, Nissan’s ProPILOT technology will offer increasing levels of autonomy, with the system eventually able to navigate city intersections. 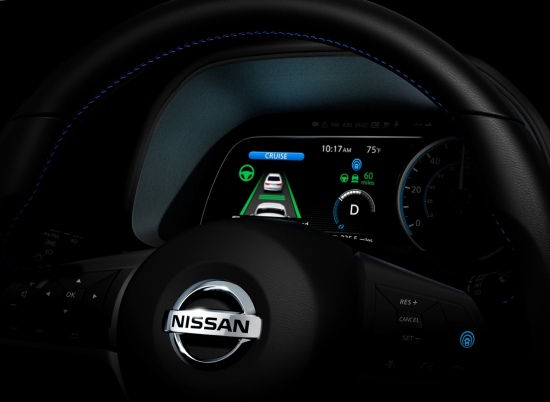 Nissan has so far applied ProPilot technology in the Serena and X-Trail (earlier post) in Japan. As applied in those vehicles, the accelerator, brakes and steering are controlled based on information obtained through a mono camera equipped with advanced-image processing software. Nissan incorporated its own image analysis technology with Mobileye’s technology into ProPILOT. The technology instantly detects the three-dimensional position of the preceding vehicle and lane markers and accurately controls the steering.

In 2010, Nissan was the first carmaker to introduce an all-electric vehicle to the mass market. Today, the Nissan LEAF is the world’s best-selling EV with more than 250,000 units sold and more than 3 billion kilometers traveled. The global reveal of the new LEAF is slated for later this year.