NAVYA, a pioneer in developing and manufacturing autonomous vehicles, will establish its first assembly plant outside of Europe in Southeast Michigan. Beginning last year, the French company partnered with Mcity, a public-private partnership led by the University of Michigan to accelerate advanced mobility vehicles and technologies, to bring the NAVYA ARMA, a 100% driverless, completely electric, Level 5 autonomous shuttle vehicle to Mcity.

Based on the strong partnership with the university, NAVYA has decided to manufacture its vehicles in the Ann Arbor area. 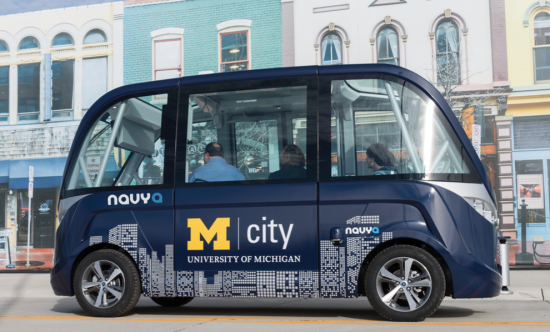 According to NAVYA’s Vice President of Sales, Henri Coron, the company has an immediate objective to build 20 vehicles at the new plant by the end of this year. To achieve that goal, NAVYA plans to hire a team of 15 people at the Michigan facility by the end of 2017. The Michigan Economic Development Corporation (MEDC) is currently considering providing an incentive in support of the project.

In 2016, Michigan Gov. Rick Snyder signed legislation that allows driverless vehicles to be tested in the state. In December 2016, the ARMA was introduced to North America at Mcity’s one-of-a-kind proving ground for connected and automated vehicles. Since then, the shuttle has been used to support research and to demonstrate automated vehicle technology at the test facility, with NAVYA becoming an affiliate member of Mcity.

NAVYA ARMA. ARMA is a safe, reliable and comfortable 100% autonomous, driverless and electric public transport vehicle that can carry up to 15 people. It has been designed to ensure the specific functions of an autonomous vehicle while optimizing navigation and safety.

The shuttle is equipped with a multitude of sensor technology—LiDAR, GPS RTK, Odometer and camera stereovisions—to provide 3D vision which enables it to map out the environment, detect obstacles in its path and identify traffic and road signs.

The NAVYA ARMA shuttle can reach speeds of 28 mph. However, taking into account the nature of the sites it often serves, this is often limited to 15 mph. The vehicle aims to provide a complement to current public transport systems over distances that are too short to go by car or are too long on foot.

In October 2016, NAVYA’s shareholders unanimously d a raise in capital of €30 million. French groups Valeo and Keolis and the Qatari Group8 acquired a stake in the company alongside Gravitation and CAPDECISIF Management, who joined in 2015 and Robolution Capital, the original investor.

Make 6-12 passenger autonomous shuttles all over the city, cut congestion and parking.

This could quickly become one of the solution for lower cost, cleaner-quieter public transport for city core areas.