Nicolas Hulot, France’s new minister responsible for environment and energy, presented the country’s new climate plan at a press conference at the Ministry. Prepared at the request of the President and the Prime Minister, the climate action plan is divided into six main themes: render the Paris Agreement irreversible; improve the daily life of the French; end the use of fossil energy and engage in carbon neutrality; make France the Nº 1 green economy; encourage the potential of ecosystems and agriculture; and intensify international mobilization on climate diplomacy.

Among the many actions outlined in the plan is the targeting of ending the sale of cars emitting greenhouse gases (“gaz à effet de serre”) by 2040. (The plan at this current level of detail does not specify whether or not that is tailpipe emissions or full lifecycle emissions, factoring in upstream for electric vehicles.) France also intends to initiate an ambitious (“ambitieuse”) Euro 7 standard at the European level. 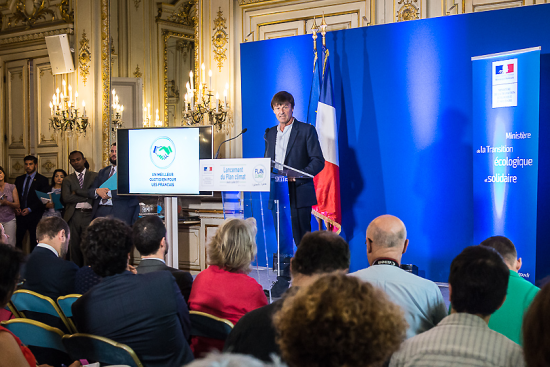 Shorter term actions on the mobility front will include:

The government will also work on laws dealing with road pricing, access to mobility, alternative modes of transportation and city traffic.

Also outlined in the plan is an initiative to halt the production of fossil hydrocarbons in France. The government will introduce a bill in the fall prohibiting new exporation permits—including for shale gas and unconventional hydrocarbons—and not renewing existing operating concessions.

We need to move faster than a ban in 2040. We should ban production of all diesel cars by 2025 and ban production of all gasoline cars by 2030. However, R&D in combustion engines should be banned starting in 2020 in order to force the auto industry to focus their resources on making zero emission vehicles. Polluting products of any kinds should not be legal to make when there are non-polluting alternatives. Banning polluting products is better policy than subsidizing non-polluting products. It is much easier to implement a ban than a subsidy.

The old light bulb was banned and now we got LED lights that uses only 1/10 of the power to make the same light. We can do it with cars also to get rid of most air pollution. The more BEVs we make the better and cheaper they get as witnessed by Tesla’s first mass produced car the Model 3 at only 35k USD or the same price as comparable combustion offerings from Audi, BMW and Benz.

It will not be easy to ban or get rid of polluting ICEVs. ICEVs (many polluting V-8) over 50 and 60 years old are still running in Cuba and other places.

Sales of large/heavy gas guzzlers could be discouraged with much (progressive) higher registration fees or fuel taxes or both. A progressive (%) ceiling on new ICEVs manufacturing-importation and sales could also be very effective over 20 to 25 years.

THIS IS BIG !! This is not about the details, but about an entire, modern, trend-setting? country telling big oil THE PARTY IS OVER !!

Doesn't matter exactly how this gets implemented. Smart business people will now stop investing in oil / gas, and instead they will ramp up investing in new factories, cars, renewable energy deals.

This is what changes societies - Merci !!

Almost simultaneously, France announced that it will close 17+ out of 58 NPPs. Something does not add up?

Where will the extra 24/7 e-energy for electrified vehicles come from? Solar + Wind with storage?

They were enforcing and promoting polluting diesel not long ago. Now they want an electricity crisis because they also want to ban nuclear power.

Folks, i told you that behind close door they were impending gasoline serial hybrid with exhaust pressure and heat capture and recirculation. The perfect solution for big trucking.