The LX1 is a series hybrid that incorporates a driveline that consists of electric drive motors mounted at the wheels, electric driven hydraulics, a battery energy storage system, a significantly smaller diesel engine (3-liter vs. 13-liter) and new machine architecture. As well as the improvement in fuel efficiency and reduction in emissions, the LX1 also offers a significant reduction in noise pollution compared to its conventional counterparts. The prototype—which has 98% new parts and a fundamentally new machine design—is capable of doing the work of a wheel loader that’s one size larger. 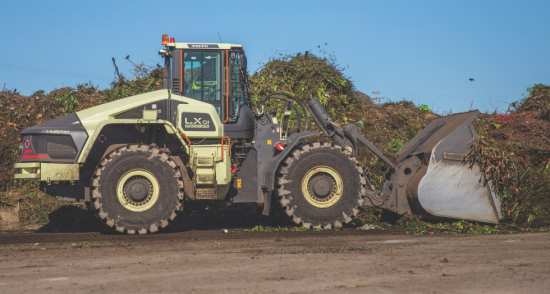 CALSTART, a non-profit clean transportation technology industry organization, conducted independent testing of the prototype and confirmed the 50% improvement in fuel efficiency on average.

Testing began at the Redwood Landfill and Recycling Center, a green waste composting site in the northern part of the state. Both fuel efficiency and greenhouse gas emission tests were conducted at the facility and, although the data is still being analyzed, the results so far show an average improvement of 50% in fuel efficiency, equating to a reduction of 35% in fuel consumption and greenhouse gas emissions.

The California Energy Commission (CEC) provided more than $1.8 million of funding for the LX1 project through its Alternative and Renewable Fuel and Vehicle Technology Program. The CEC program provides funding to help both develop next generation transportation technology components and vehicles, as well as speed the deployment of lower carbon transportation product available today. Volvo provided matching funds for this technology demonstration project.

Waste Management Inc. was an integral partner in the project, operating the advanced prototype at landfills both in Northern and Southern California. The feedback provided by the Waste Management Inc. operators will help Volvo CE improve the product and develop a second generation version.