Porsche opened its new technology center in Berlin-Adlershof. The new site features a 25-meter-high solar pylon that generates up to 30,000 kWh of electricity annually and covers the entire annual demand of the new Porsche Center. The pylon weighs 37 tonnes and comprises 7,776 solar cells, representing a total surface area of approximately 270 m2. Liquid-cooled, 800V 350 kW fast-charging is also installed on the premises.

Parallel to the Berlin-Adlershof site, the existing Porsche Center in Berlin has been modernized and the Porsche Center Berlin-Potsdam has been extended extensively. Investments at the three locations total €15 million (US$17.2 million).

Another charging station for the testing of modern charging technology is currently being built at the US headquarters of the sports car manufacturer in Atlanta. The Porsche Mission E (earlier post) will be the first production vehicle with 800-volt technology, which will bring Porsche to the market by the end of the decade. The development partner for the new charging technology is Porsche Engineering Group GmbH, headquartered in Weissach. 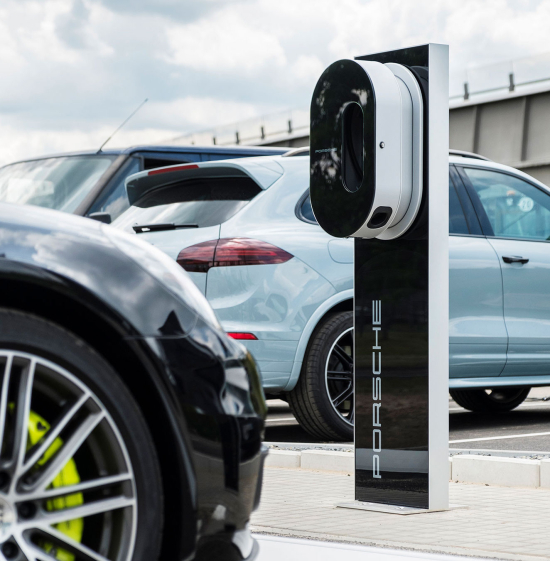 Porsche and its Volkswagen Group sibling Audi, BMW Group, Daimler and Ford are partnering on the creation of an ultrafast HPC network in Europe, with power levels up to 350 kW. (Earlier post.) An initial target of about 400 sites in Europe is planned. By 2020 the customers should have access to thousands of high-powered charging points. The goal is to The charging experience is expected to evolve to be as convenient as refueling at conventional gas stations.

The Porsche Center was built on an area of around 10,000 square meters. Up to 19 vehicles can be presented in the showroom. The extensive workshop area offers state-of-the-art maintenance and repair facilities. A special feature is the integrated car body construction: all work in this sector is carried out directly in the branch by specially qualified employees.

Why do they need to wrap this with so many mysteries, generating so much frustration ? Porsche started by communicating on 800V Superchargers that could charge to 80% #92KWH Mission E batteries in <15mn, without giving details of the POWER of these chargers, nor the Amps so we can calculate the power.... Then they got the CCS standard extended and we figured out that this would mean up to 350KW DC SuperChargers, despite rest of VW group seams to favor a 150KW interim standard, that may be 400V or 800V, not sure. Still nobody has seen any Mission E prototype connected to that level of 350KW Supercharging power so we can see during how much time it does actually charge one car battery at real 350KW. Nor did they give any indication on the warranty of Mission E batteries, compared to Tesla current 8 Years with unlimited millage on Models S & X, for battery and drive train / electric motors. Nothing is impossible in that space but everything will mean trades off, and this lack of clarity seams that they have something bad to hide...Like if you actually charge any one car at 350KW its battery warranty may fall to 1 or 2 years only ? There is a trick here for sure, as they have yet no special battery techno that could support frequent up to 4C charge rates without wearing very fastly.

Near future higher power charging facilities will force battery and BEV manufacturers to use appropriate ultra quick charge batteries or install on board limiters, to reduce charging rate (voltage and current) to whatever batteries can take without affecting their duration.