Audi is providing public demonstration drives on board an Audi A7 piloted driving concept nicknamed “Jack”. Selected brand customers and fans will get their first experience of piloted driving on the A9 north of Munich. 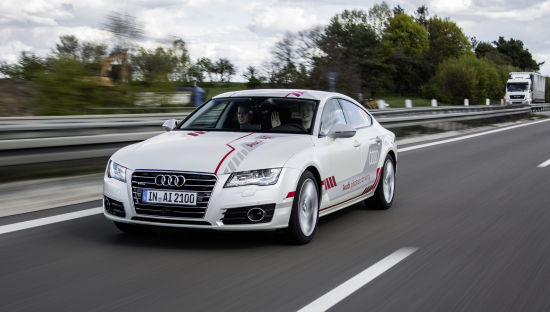 The customer trips in “Jack” start in the myAudi Sphere at Munich airport. The route goes via the A9—part of Germany’s “Digital Motorway Test Bed. With a normal traffic flow, the piloted journey takes around 60 minutes. An Audi expert is always on board. After the journey participants are asked for their opinion, with their impressions incorporated into the development of future automated driving functions.

The opportunity to ride in “Jack” will start tomorrow and run through to August. Potential test drivers are targeted via various communications channels, including the social media sites run by Audi Germany. At the same time, Audi Business Innovation GmbH has raffled places to users of its premium mobility service Audi on demand. Participants in the “Miles and More” program can also swap accumulated miles for a trip in “Jack.”

Audi has already used the A7 piloted driving concept test vehicle on three continents since 2015. On the A9 it can drive at speeds up to 130 km/h (80.8 mph). It accelerates, brakes and changes lane predictively and smoothly while cooperating with other road users.

The experience from the test drives with “Jack” has been incorporated into the development of piloted driving. The highlight here is the central driver assistance controller (zFAS) which uses signals from all the sensors to continuously generates a detailed image of the surroundings. The zFAS is fitted for the first time as standard in the new Audi A8. (Earlier post.) The luxury sedan was premiered last week at the Audi Summit in Barcelona and has been developed for highly automated driving as per SAE Level 3. The Audi AI traffic jam pilot will allow the driver to hand over the driving task to the car on freeways in slow moving traffic at speeds up to 60 km/h (37.3 mph).