Silicon anodes can deliver 3~5-times higher capacities compared with current graphite anodes in lithium-ion batteries. However, their volume expands enormously during each charge-discharge cycle, leading to fractures of the electrode particles or delamination of the electrode film, both resulting in rapid capacity decay. Typical charge-discharge numbers for microparticle-size Si anodes are less than 100.

Numerous approaches have been tried to address this problem. Now, a KAIST research team led by Professors Jang Wook Choi and Ali Coskun have integrated molecular pulleys, called polyrotaxanes, into the electrode binder to enable stable cycle life for silicon microparticle anodes at commercial-level areal capacities. A paper on their work appears in the journal Science.

In a polyrotaxane, rings are threaded into a polymer backbone and can freely move along the backbone. The free moving of the rings in polyrotaxanes can follow the volume changes of the silicon particles. 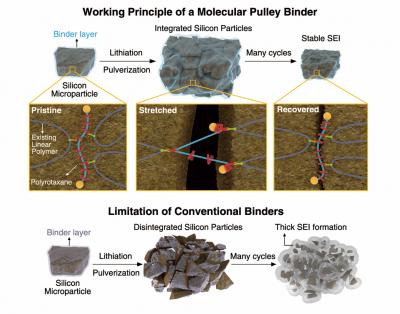 The rings’ sliding motion can efficiently hold Si particles without disintegration during their continuous volume change. Even pulverized silicon particles can remain coalesced because of the high elasticity of the polyrotaxane binder.

The authors said, “This is a good example of showing the importance of fundamental research. Polyrotaxane received Nobel Prize last year, based on the concept called ‘mechanical bond.’ The ‘mechanical bond’ is a newly identified concept, and can be added to classical chemical bonds in chemistry, such as covalent, ionic, coordination, and metallic bonds. The long fundamental study is now expanding in an unexpected direction that addresses longstanding challenges in battery technology.”

The authors are currently collaborating with a major battery maker to get the molecular pulleys integrated into real battery products.

Mechanical bonds have come to the rescue for the first time in an energy storage context. KAIST team’s ingenious use of mechanical bonds in slide-ring polyrotaxanes—based on polyethylene glycol threaded with functionalized alpha-cyclodextrin rings—marks a breakthrough in the performance of marketable lithium-ion batteries. This important technological advance provides yet more evidence that when pulley-like polymers carrying mechanical bonds displace conventional materials based on chemical bonds alone, the unique influence of this physical bond on the properties of materials and the performance of devices can be profound and game-changing.

The Nobel Prize in Chemistry 2016 was awarded to Jean-Pierre Sauvage, Sir J. Fraser Stoddart and Bernard L. Feringa for their design and production of molecular machines. They developed molecules with controllable movements, which can perform a task when energy is added.