Home About Contact RSS GCC Twitter Newsletter
“Dirty, Difficult, And Dangerous”: Why Millennials Won’t Work In Oil
Report: Toyota to begin mass production in China in 2019 of EVs based on C-HR

Project shows maritime fuel cell generator can increase energy efficiency by up to 30% at part load; reliability and cost issues

A recent project demonstrated a 100 kW fuel cell generator with 72 kg of hydrogen storage for marine applications. Project goals were to demonstrate the use of the generator in the maritime environment, identify areas requiring additional research and development, analyze the business case, and address regulatory and other market barriers.

A report authored by Sandia National Laboratories on the project found that the project showed that it is possible to increase energy efficiency by up to 30% at part load and reduce emissions to zero through the use of hydrogen fuel cells. (Although Sandia wrote the report, the project was performed by fourteen partner organizations.) The project also identified paths forward to wider adoption of the technology in this sector.

The generator was designed and built by Hydrogenics with safety and regulatory reviews by the Hydrogen Safety Panel, US Coast Guard, and the American Bureau of Shipping. Project partner Young Brothers operated the generator for 10 months powering refrigerated containers in Honolulu, Hawaii.

Although fuel cells have been used in many successful applications, they have not been technically or commercially validated in the port environment. One opportunity to do so was identified in Honolulu Harbor at the Young Brothers Ltd. (YB) wharf. At this facility, barges sail regularly to and from neighbor islands and containerized diesel generators provide power for the reefers while on the dock and on the barge during transport, nearly always at part load. Due to inherent efficiency characteristics of fuel cells and diesel generators, switching to a hydrogen fuel cell power generator was found to have potential emissions and cost savings.

Based on this potential benefit, Young Brothers agreed to host a hydrogen fuel cell generator and utilize it in the same way they use their existing diesel generators, powering reefers on the dock and on interisland barges. The project benefits outside of Young Brothers include the lowering of technological and business risk for future adopters of the technology by demonstrating the satisfactory use of the generator in the port environment and by feeding back to the DOE R&D programs, analyzing the real- world business case, as well as addressing regulatory and other market barriers to widespread adoption. 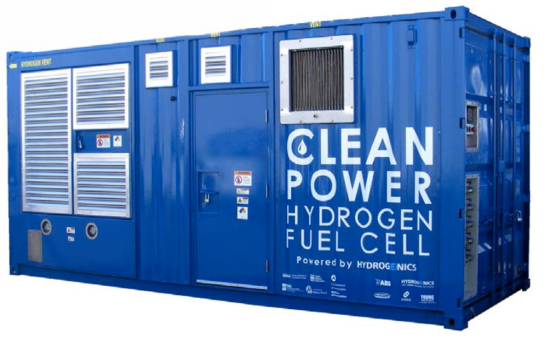 The system contains 72 kg of hydrogen at 350 bar and has a rated power of 100 kW, 240 VAC 3-phase, which can be divided among 10 plugs to power up to 10 reefers at a time. The design of the generator was reviewed by the US Coast Guard, American Bureau of Shipping, and the Hydrogen Safety Panel to ensure safety and compliance with regulations.

The generator was filled with hydrogen provided by Hickam Air Force Base without charge, with project partner Hawaii Center for Advanced Transportation Technologies (HCATT) as the prime contractor of the Hickam hydrogen station. When fueling was needed, the generator was loaded onto a chassis (wheeled frame trailer) and trucked to Hickam, about 7 miles from Young Brothers, where the station operator would perform the fill in about 20-30 minutes. The generator was trucked back to Young Brothers and off-loaded for continued use. Each of the eight fills during the deployment period was conducted smoothly and without any problems, dispensing a total of 428 kg into the generator.

By comparison, the net efficiency of a comparable diesel generator efficiency is from 25% to 34% in this same load range. Using no diesel fuel and producing zero emissions at the point of use, during the demonstration period, the fuel cell generator displaced 865 gallons of diesel fuel, more than 16 MT of CO2 emissions, and avoided nearly 150 combined kilograms of criteria pollutants (NOx, CO, HC, PM, and SOx) as compared to an existing Young Brothers 350 kW Tier 3 diesel generator.

The Sandia report noted that the deployment experienced numerous technical issues with the generator that limited its use. The primary technical issue during the deployment was an inconsistent startup which was attributed to a communication problem between the overall system controller, inverter, and fuel cell rack. This led to problems with draining of the startup battery, and the overall result was many aborted attempted starts and non-use until the problem could be identified and fixed.

The generator’s fuel cells also experienced higher-than-anticipated consumption of DI water, which was exacerbated by the high ambient temperature along with a small DI water reservoir, causing the operators to have to fill the reservoir more than expected. The technical lessons learned from the deployment will be used by Hydrogenics to modify this generator for subsequent testing as well as to improve next generation products.

Analysis showed that even with fuel cell costs reaching the DOE target of $50/kW, the capital cost of the generator system is projected to remain three-times higher than today’s comparable diesel generator due to the balance of plant. Further, while this demonstration enjoyed free fuel from the Hickam station, that will not be the case in true commercial adoption. The current delta in hydrogen costs (high) and diesel costs (low) is expected to significantly decrease in the future as hydrogen costs decrease and diesel costs increase, but the current differential hinders the ability of today’s fuel cell systems to achieve cost parity with today’s diesel systems.

As the first validation of a self-contained hydrogen fuel cell generator at a port, this project showed that it is possible to reduce maritime-related emissions through the use of hydrogen fuel cells, and identified paths forward to more widespread adoption of the technology in the marine sector. This includes not only the use of a generator for reefer power but other applications as well. These include port equipment, electrical resiliency against grid outages, auxiliary power for vessels, and vessel propulsion power. Establishing hydrogen equipment usage at port also has the benefit of establishing a local hydrogen infrastructure hub that can be leveraged to provide hydrogen for regional transportation uses. Future usage of the generator by other hosts will continue to collect the information needed to completely assess the business case as well as provide opportunity for continued development of the technology.

Hydrogenics never got the fuel cell ferry they were supposed to be demoing on a regular rout in the docks here in Bristol working either.

Since fuel cells are routinely used in applications where reliability is paramount such as remote mobile towers and emergency back up where their record is way better than diesels, reliability looks to me to be more of an issue with Hydrogenics than with fuel cells.

Costs are a different matter.

"Although fuel cells have been used in many successful applications, they have not been technically or commercially validated in the port environment."

Fuel cells work by combining O2, taken directly from the local air, with H2 stored in a tank. Air in a marine environment, like a port, contains stuff not normally found inland. Stuff like salt. I imagine that might not be good to have passing through a fuel cell. Getting proper validation is a prudent step.

The diesel engine efficiency is underestimated in this article. On the other hand there are internal combustion engines with internal heat recovery which largely surpass the fuel cell efficiency. See https://www.slideshare.net/giurcal/total-heat-recovery-engine

Efficiency comparison was done against existing diesel engines as it should be done.

This is just one application where existing non-polluting FCs can be economically, technically and performance competitive with polluting ICEs.