Mercedes-Benz Trucks has introduced its first 3D-printed spare part made of metal (an aluminum-silicon material), a thermostat cover for truck and Unimog models from older model series.

In contrast to the Selective Laser Sintering (SLS) process used in plastics 3D printing, 3D printing of metallic components uses Selective Laser Melting (SLM). In the case of the thermostat cover, for example, the powdered aluminium/silicon material (ALSi10Mg) is applied in individual layers and melted by an energy source—usually one or more lasers. 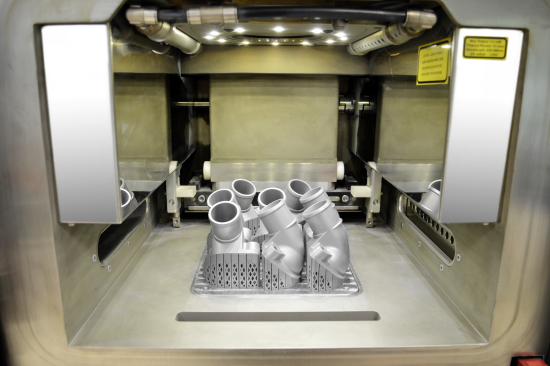 When one layer is completed, a new layer of powder is applied automatically and the melting process is repeated. The process is repeated until a high-strength, three-dimensional aluminium component suitable for use in areas of high temperature has been produced. With the layered structure, the process also offers a level of geometrical freedom that cannot be matched by any other production method.

In the Customer Services & Parts division of Mercedes-Benz Trucks, automotive 3D printing began its increasing success in the production departments for the after-sales and replacement parts business a year ago. Since then, Customer Services & Parts has worked together with the researchers and pre-developers at Daimler AG to constantly improve and expand the use of the latest 3D printing processes for plastic parts. 3D printing of high-quality plastic components has now successfully established itself as an additional production method, and is particularly suitable for the production of smaller batches.

Metal parts from the 3D printer excel with their very high strength and thermal resistance, and the process is therefore particularly suitable for the production of mechanically and thermally stressed components required in small numbers.

Metallic components can be produced “at the touch of a button” with any geometry and in any numbers. 3D replacement parts production began with rarely ordered aluminium parts. These excel with almost 100% density and greater purity than conventional die-cast aluminium parts. Apart from their high strength and hardness, as well as high dynamic resistance, their production requires no cost-intensive development work or procurement of special tools.

Conceivable areas of use are peripheral engine parts made of metal, in-engine parts and also parts in cooling systems, transmissions, axles or chassis. Especially when they have complex structures, 3D-printed metal parts in small numbers can be produced cost-effectively as infrequently requested replacement parts, special parts and for small and classic model series.

The new thermostat cover is an example of cost-effective spare and special parts production in top quality, made possible by use of the 3D printing process for highly resistant metal parts made of die-cast aluminium alloy. This replacement part is only ordered in small numbers, and is used in older truck and Unimog models whose production ceased around 15 years ago.

It is a really good idea for spare parts for old, expensive vehicles, probably too expensive for mass produced parts, unless there is a compelling reason to do so.

3D printing will eventually take over - think of a world where there are no warehouses and no stocking costs. Every part needed, from anything ever manufactured, by any company, could be printed and mailed to anybody at any time.

Yes, it's only effective now at low volumes, but these costs will drop, and when you factor in no stocking and storage costs, the industry could eventually move most spare auto parts into "print only" availability.

Why mail it? If the 3D printing serves multiple companies/repair locations, put one in every city of any size, print the part and deliver it that day. NAPA could house it.