The SOLETAIR project (earlier post) has produced its first 200 liters of synthetic fuel from solar energy and the air’s carbon dioxide via Fischer-Tropsch synthesis. Project partners include INERATEC, a spinoff of Karlsruhe Institute of Technology (KIT), VTT Technical Research Center of Finland and Lappeenranta University of Technology (LUT).

The mobile chemical pilot plant produces gasoline, diesel, and kerosene from regenerative hydrogen and carbon dioxide. The compact plant is designed for decentralized production, fits into a shipping container, and can be extended modularly. 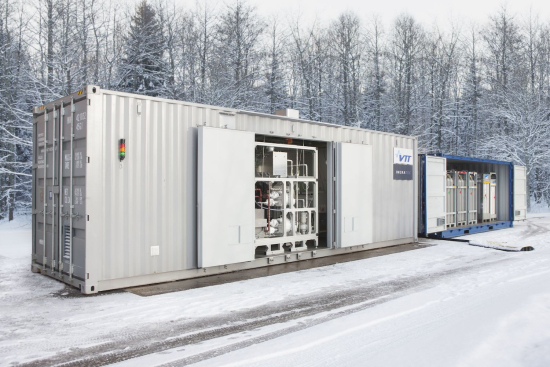 The SOLETAIR project started in 2016. This summer, a decentralized plant network consisting of three main components was established.

For the first time, the complete process from photovoltaics and capturing carbon dioxide from air to fuel synthesis has been set up to demonstrate its technical feasibility.

The pilot plant has a production capacity of up to 80 liters of gasoline per day. In the first campaign now completed, about 200 l of fuel were produced in several phases to study the optimum synthesis process, possibilities of using the heat produced, and product properties.

In June 2017, the plant network was opened officially by Jamie Hyneman, co-host of the “MythBusters” science television series.

The SOLETAIR project will expire in mid-2018 and is funded with EUR 1 million by the Finnish Funding Agency for Technology and Innovation (Tekes). Information obtained in the course of the project will be used for the commercialization of the technology.

Rumors are that the production cost is $100+/Liter?

I wish this article gave some insight into whether this has any hope of becoming practical.

I don't understand why you would want to do this. Both sources of raw stock are already the result of inefficient chemical transformations. Now you are recombining them to use as a fuel which puts the CO2 right back where it came from, the atmosphere and increases the cost...and, you are making no headway in cleaning up the Planet.

If you take CO2 from the air to make fuel you have recycled. At present you have the CO2 in the air and add to that with 200 million tailpipes.

Photovoltaics - in Finland ?
Look at the image, it has snow all around it!
Perhaps these would be of use in isolated islands where they needed a bit of diesel now and then, but not in developed areas.
Just put the solar energy into the grid, and perhaps then into automotive batteries, or anything you want.

This machinery when installed in texas or mexico can produce synthetic fuels at 50 cents a gallon because it don't need a lot of human workers when properly set up. Maybe in the night it can be powered by an adaptation of a thorium generator. Im interrested to buy their fuels at a better price than actual petroleum fuels. Remove any taxes on these synthetic fuels as it don't emit carbon dioxide in the air.

This is to test all elements of the production chain, not to work out the best way of doing things in Finland:

'For the first time, the complete process from photovoltaics and capturing carbon dioxide from air to fuel synthesis has been set up to demonstrate its technical feasibility.'

However, since hydrogen can be stored long term perhaps those long Finnish summer days would work, but my own bet would be on producing the fuel somewhere sunny like Tunisia then importing it.

There are a lot more sunny places than those with oil.

I wonder if the US Navy are interested in this? They have all these nuclear powered aircraft carriers and need fuel for their planes. If this technology works at scale they may not need support tankers.

The Navy can refuel planes on nuclear powered carriers, McCain block that.