Chanje, a California-based commercial electric vehicle and energy solutions company, has emerged from stealth mode. Chanje’s first model, the V8070 panel van, already has volume orders and will be delivered later this year. The van has a payload capacity of up to 6,000 lbs (2,870 kg) and 580 ft3 of cargo volume. A 70 kWh liquid-cooled battery can charge at up to 7.2 kW. The dual motor system delivers a peak 148 kW and 564 lb-ft (764 N·m) of torque. The Chanje vehicles have demonstrated greater than 50 MPGe fuel economy in city and highway driving when tested by independent third-parties.

Utilizing a single platform and global vehicle strategy, Chanje will subsequently introduce a full range of electric models including larger trucks and shuttle buses in a variety of lengths and capacities, all aimed at the urban vehicle segment. 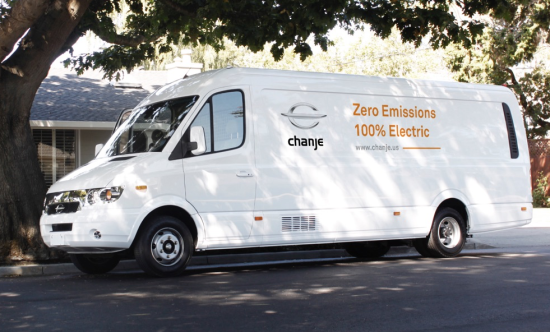 Chanje is a privately held US-registered corporation with technology and investment from its co-founding partner, Hong-Kong-based FDG Electric Vehicles Limited. FDG Electric Vehicles Limited is a vertically integrated battery and electric vehicle manufacturer listed on the Main Board of the Hong Kong Stock Exchange that engages in (i) vehicle design and the design, manufacture and sale of electric vehicles; (ii) research and development, production and sale of lithium-ion batteries and related products; (iii) research and development, manufacture and sale of cathode materials for lithium-ion batteries; and (iv) direct investment.

In order to convert large North American commercial fleets to zero-emission as efficiently as possible, Chanje strategically chose to partner with FDG to leverage its technology and economies of scale found in China. FDG and Chanje co-created the product. FDG brings immediate scale and OEM expertise in medium-duty EVs. Chanje has provided global expertise from the transportation sector, innovation engineering and a deep understanding of clean energy vehicle adoption.

FDG and other partners combined have invested nearly US $1 billion in bringing the medium-duty EV to market.

Chanje will subsequently work with large fleet customers to provide renewable energy and charging capabilities as a turnkey service. Chanje’s goal is to support organizations as they transition to energy systems that are secure, stable, local, renewable and efficient. This will be in the form of a microgrid depot solution that is expected to include four components: renewable energy; charging infrastructure; energy storage; and grid services.

Chanje is currently undergoing a site selection process for an assembly facility in the United States which will create both high-quality long-life electric vehicles at scale and American clean transportation jobs. The Chanje search includes multiple states near port facilities west of the Mississippi.

Another hand for California + HK?

Those electric vehicles are welcomed. It will help went ICE trucks are progressively banned from inner cities?

Transit vans are popular, Mercedes is making an EV version. Soon
Ford and Dodge could do the same. We are getting there slowly, but the pace will have to pick up soon.