The Air Force Research Laboratory (AFRL) Advanced Power Technology Office, along with Engineered Propulsion Systems and the Arnold Engineering and Development Center, recently concluded ground-based testing of an advanced diesel engine that promises to increase the utility and ease the logistics burden of military aircraft missions.

The high-efficiency aviation diesel engine is a potential replacement for current manned and unmanned aircraft internal combustion engines. Designed by Engineered Propulsion Systems as part of an AFRL effort, the Graflight V-8, 4.3-liter engine is a “clean sheet” design specifically intended for aircraft use. It is liquid-cooled and capable of using either a composite or aluminum propeller. 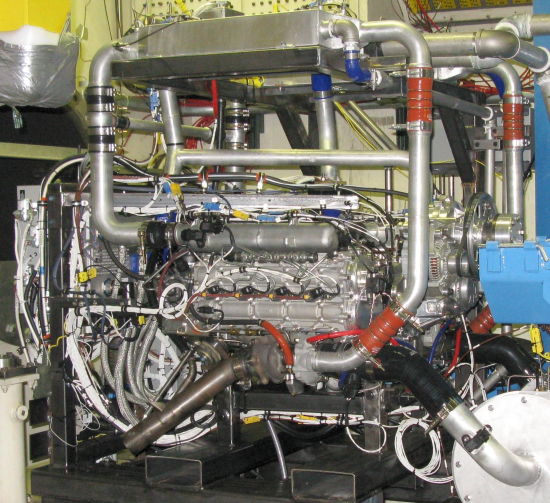 The Graflight engine uses a compacted graphite iron (CGI) cylinder block. EPS CEO Michael Fuchs was among the first to employ CGI in the automotive field in America. Aluminum aviation crankcases often crack from fatigue—a common point of failure in general aviation (GA) airplane engines. The Graflight V-8 block will be able to serve far longer between maintenance overhauls as a result.

The Graflight V-8 also uses steel pistons instead of aluminum. Strong, fatigue-resistant steel allows shorter pistons, reducing overall engine weight. Since steel pistons have almost the same thermal expansion coefficient as the CGI block, engine warm-up damage is minimized. Friction and wear are also reduced compared to aluminum pistons, and cold weather starts are not a problem. Taken together, the CGI block and the steel pistons allow for a target tim) of 3,000 hours, compared with 1,500-2,000 hours for other diesel piston engines.

Each cylinder has a dynamic pressure sensor that feeds data to the Electronic Control Unit (ECU) every time a cylinder fires, allowing dynamic optimization of the fuel injection timing over the highly variable conditions experienced by an aircraft engine. Continuous compression monitoring automatically alerts before problems such as clogged injectors or leaky valves can become serious safety problems.

The engine performance and propeller control are managed by a dual lane EECS (Electronic Engine Control System) manufactured by Bosch. The basic architecture of the EECS consists of two lanes with two independent processors performing redundant calculations backed by an intelligent voter chip. The results of both lanes will be monitored by another voter system that can be run in an AUTO mode scenario or Pilot OVERRIDE mode.

The compact engine is built to use up to 40% less fuel than a comparable aircraft turbine engine, with less vibration. This increased efficiency extends operational range and loiter time by up to 50%. When compared with other aviation diesels, it is still 15% more fuel efficient because unlike those engines, it was built specifically to meet the requirements of flight.

Since this engine requires less fuel to fly the same distance, an aircraft or unmanned air vehicle could either carry more payload or fly a longer mission. Overall, if implemented, this technology has the potential to provide the Air Force a significant improvement in mission flexibility.

Using an innovative new control unit, the engine can operate using diesel, Jet-A, or JP-8 fuels that are readily available in-theater, thereby reducing or eliminating the need to transport specialized fuels. This flexibility opens up the possibility of unmanned aircraft use in regions that were previously impractical.

Often one of the greatest military logistics burdens is fuel transport. If we can reduce or eliminate the need to ship specialized fuels, we’ve then reduced the associated cost and risk.

The first step in turning this innovative design into reality was proof-of-concept testing, beginning with the recent ground tests conducted at the Arnold Engineering Development Complex. Here, the development team performed simulated flights at altitude in the facility’s Propulsion Development T-11 Test Cell, which was reopened for this test effort after not being used for a decade. The T-11 test cell simulates airflow at a variety of altitudes.

During the ground testing, the EPS Graflight engine was taken through a range of operational flight conditions, from sea-level to 30,000 feet and back, successfully meeting performance expectations and generating valuable data on performance factors such as fuel consumption, calibration, vibration and power output.

AFRL researchers will use this data to prepare for future flight testing, confirm the engine’s efficiency and validate the engine’s performance characteristics for future Air Force users.

Once the proof-of-concept is fully demonstrated, it will be considered for use in several Air Force manned platforms. Designers will also work to scale the engine down to a smaller variant, better sized for current Air Force unmanned aircraft.

For the general commercial market, EPS said that it is closing in on FAA certification for the Graflight V-8. EPS has been flying its engine on a Cirrus SR22 test bed. Rated in the range of 320 hp to 420 hp, the Graflight V-8 is expected to be suitable for a variety of helicopters and single- and twin-engine airplanes, including the Robinson R44, Beechcraft Bonanza and Baron, Cessna TTx and 206, GippsAero GA8 AirVan and more.

The engine will initially be offered as an STC’d (supplemental type certificate) replacement for existing aircraft engines.

Aircraft that I'd like to see on that compatibility list are the Cessna P-210 and Piper Aerostar.

EPS is a latecomer to the aerodiesel game compared to DeltaHawk.  A head-to-head comparison of their offerings would be interesting.