ChargEVC: New Jersey plug-in electric vehicle registration up 79% for MY 2016 vehicles over 2015

Registration of model year 2016 plug-in electric vehicles (PEVs) in New Jersey was up 79% over 2015, according to a recent analysis by ChargEVC, a diverse coalition of organizations and companies that support growth of the electric vehicle market. New Jersey now has more than 10,000 PEVs on the road, 60% of which have been sold in the last two years.

The uptick in New Jersey sales is over twice as robust as already strong national sales: For the first half of 2017, US consumers bought 38% more plug-in electric vehicles than in the same period in 2016, even though automobile sales are down overall. 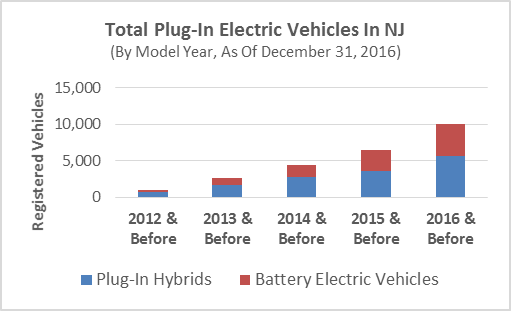 ChargEVC worked with the New Jersey Department of Environmental Protection, which provided the raw data based on vehicle registrations, to complete this EV sales analysis. These statistics include full-scale vehicles with a plug (plug-in hybrids and battery electric vehicles) and do not include smaller neighborhood electric vehicles, natural gas fueled vehicles, or traditional hybrids (without a plug).

Interest in these cars is growing. We expect this trend will continue as more affordable vehicles with longer range become available in the next 24-36 months. In fact, we are working hard to accelerate this trend since all of us in New Jersey will enjoy a wide variety of benefits with more of these vehicles on our roads.

This accelerating growth in New Jersey echoes analysis from a variety of sources. ExxonMobil just increased their PEV forecast by 50%, and Organization of Petroleum Exporting Countries (OPEC) raised their projections to almost six times higher than it was only a year ago.

ChargEVC will shortly release a study that quantifies and details the diverse benefits resulting from widespread electrification of cars in New Jersey. A roadmap will lay out the programs and policies needed to strengthen the emerging electric vehicle market in New Jersey, such as expanding vehicle charging infrastructure and increasing consumer awareness. The study and roadmap will be announced at a press event to be held on 14 September 2017 at the State House in Trenton, New Jersey.

Is this as good as California?