Nissan Motor Corporation and its Infiniti brand revealed a sleek, open-wheeled electric retro roadster prototype at the 2017 Pebble Beach Concours d’Elegance. The car, called Prototype 9, is a re-imagining of a 1940s race car with time-honored production techniques employed to realize its retro design. The Prototype 9 is the first Infiniti to be powered by a new EV powertrain from Nissan Motor’s Advanced Powertrain Department—a 30 kWh high-voltage battery paired with a prototype electric motor, one not yet seen on a production vehicle.

Prototype 9 is the result of an after-hours endeavor by a passionate and enterprising team of employees from across the Nissan Motor Corporation. This nod to the future contrasts with the traditional materials and techniques applied for the Prototype 9’s manufacture, including panels hand-beaten by a team of Takumi—Nissan Motor’s master artisans. 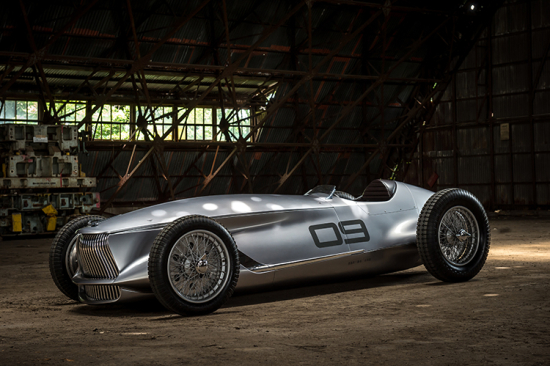 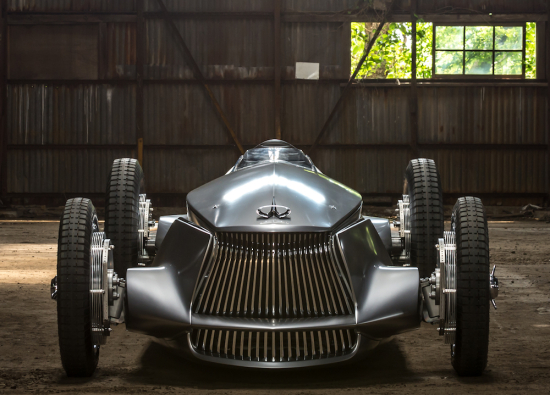 Prototype 9 celebrates the tradition of ingenuity, craftsmanship and passion of our forebears at Nissan Motor Corporation, on whose shoulders we stand today. It started as a discussion: What if Infiniti had created a race car in the 1940s? If one were to imagine an open-wheeled Infiniti racer on the famous circuits of the era, such as Japan’s Tamagawa Speedway, what would that look like? The sketches were stunning and the idea so compelling that we had to produce a prototype. As other departments became aware of this, they volunteered their time to create a working vehicle.

Prototype 9 was inspired by an emerging era of Japanese motorsport. The custom-built Prince R380, which also will be shown during Monterey Car Week at The Quail, a Motorsports Gathering, broke several land speed records in 1965 before taking overall victory at the 1966 Japanese Grand Prix at Fuji Speedway. Prince Motor Company is considered to be Japan’s original builder of premium automobiles, and its legacy can be traced to Infiniti Motor Company and its current model line. The R380 shown at The Quail is the actual Japanese Grand Prix-winning car, believed to be the only surviving R380.

Where existing and future Infiniti models adhere to the company’s “Q” and “QX” nomenclature, Prototype 9 represents something different. Echoing the company’s origins, the figure “9” is pronounced “kyuu” in Japanese – similar to the English pronunciation of the letter “Q,” which is used for all of the company’s production cars.

Finished in a bare sheet-metal skin, Prototype 9 is the result of countless hours of careful construction. The designs of the brand’s contemporary road cars are characterized by deep-stamping production methods, which enable the creation of sharply defined lines and smooth body surfaces. Far from production lines, this out-of-hours project required similarly technical yet more traditional crafting methods.

The vehicle’s bodywork is made from steel body panels wrapped around a steel ladder frame. The panels were hammered into shape by the Takumi. For Prototype 9, panel beaters incorporated INFINITI’s signature design elements, such as the double-arch grille, “shark gills” aft of the front wheels, a single-crease hood, and sharp lines that stretch from front to rear. 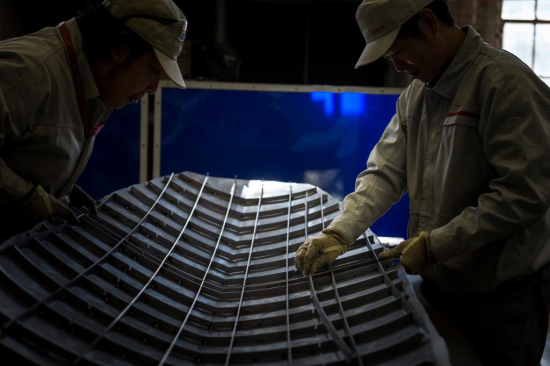 In every other respect, the car is inspired by retro aeronautical designs. Prototype 9 is defined by its smooth, aerodynamic surfaces, long hood and short overhangs, an exposed cockpit, and open-wheeled layout. Nineteen-inch center-locking wire-spoke wheels at each corner are even wrapped in period cross-ply competition tires.

I think they are trying to spread a little marketing fairy dust on the Nissan brand. Looks good, however, they'd get better range with a 1.5 dCi in the same body.
Alternately, if they could find a way to make it a side by side 2 seater, they could sell them.

That car is a beautiful work of art, and like other artworks it should be put on display BUT not on the road. Stop giving us eye-candy you nitwits, you're wasting time.

Time you enjoy wasting is not wasted time.

Right; but others money you spend on wasted time, is wasted money.

Would this qualify as steam punk?

For the apprentices and others involved the chance to blow off a bit of steam and exercise the imagination could be seen as a valuable resource for Nissan's workforce.
Design interpretation, team building and pride come to mind.

In this case Nissan is spending shareholder's money without permission.

SJC:
Right you are; if I owned Nissan stock, i wouldn't want to see them spending my money on styling experiments. In fact i would be pretty mad that their CEO, Ghosn, blew the 7 year lead in EVs he had on all the other legacy car makers. History won't be kind to Nissan for taking the risk, winning the fight and then staying stagnate, waiting for the others to catch up.