At a special preview event held in Seoul, Hyundai Motor provided an early glimpse of its next-generation hydrogen fuel cell vehicle, which is due to launch early next year. The new fuel cell SUV will spearhead Hyundai Motor’s plans to accelerate development of low emission vehicles, in line with Hyundai Motor Group’s renewed goal of introducing 31 eco-friendly models (Hyundai Motor and Kia Motors combined) to global markets by 2020. 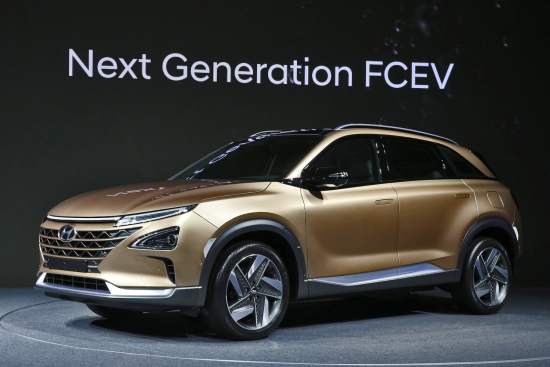 The mass-produced new vehicle will also feature advanced driver assistance technologies, alongside its extensive hydrogen-powered range. The details of the new ADAS features will be disclosed in January at the 2018 CES, along with the official model name. 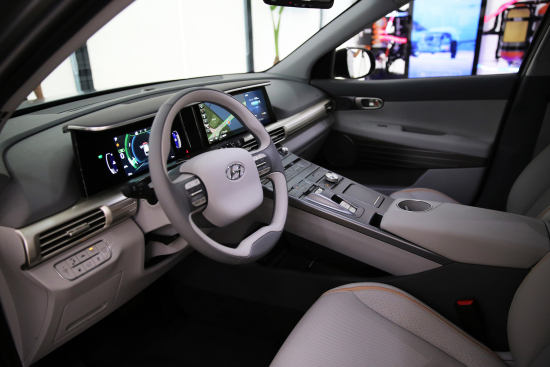 Hyundai Motor will reveal the new hydrogen SUV early next year in Korea, followed by the North American and European markets. The company will also consider expanding availability of its new fuel cell model to markets with high growth potential for eco-friendly vehicles such as China.

The roadmap sets out the brand’s goal of leading the global popularization of hybrid vehicles, expanding its lineup to SUVs and large vehicles. Another part of the plan is the development of 4WD and FR (Front Engine Rear Wheel Drive) variants, building on its proprietary Transmission-Mounted Electrical Device (TMED) system, which was developed in 2011. (Earlier post.)

While Hyundai Motor continues to develop its leadership of the electric vehicle market with its current IONIQ model, the company also aims to establish a lineup ranging from small EVs to large and luxurious Genesis-brand models. Hyundai Motor’s electric vehicle development will take place in multiple phases:

Furthermore, Hyundai Motor will develop its first dedicated architecture for pure electric vehicles, which will allow the company to produce multiple models with longer driving ranges.

Hyundai Motor will also strengthen its global leadership in hydrogen fuel cell technology. This will center on enhancing research and development efforts to boost FCEV performance and durability, while also making the technology smaller and cheaper so that it can be applied to smaller sedans. As part of these efforts, Hyundai Motor will unveil a new hydrogen-powered bus in the fourth quarter of this year.

Hyundai Motor will also take part in the Hydrogen House, projected by the Seoul city government, displaying prototypes of the new fuel cell vehicle starting today until 17 November that will promote emission-free fuel cell vehicles and a Hydrogen Society. It is through initiatives like this that Hyundai Motor will demonstrate how a Hydrogen Energy Society could be realized in the not-too-distant future.

These new FCEVs are 6X-win-win over previous models.

According to the BEV "experts" this is a waste of time and money. A corporation that has done so well knows so much less than they do.

Pro-BEVs (experts-fans) do not accept the current limitations and high cost and slow charge of large batteries required for extended range all weather BEVs.

Improved FCEVs are being developed and mass produced at higher speed and lower price.

The cost of H2 is also going down.

Hydrogen has a place in the future; it's in powering airliners and gross polluting sea-going ships; but, not automobiles. The times that BEVs require five minute quick charging are few and do not justify the dangers, complexity and inefficiency of hydrogen.

EV batteries are advancing at a rapid rate while dropping in cost. When comparing you have to consider the embedded energy costs of generating, transporting and storing the hydrogen and the cost of every hydrogen filling station. (of which there are very few now.)

I like fuel cells but I'm not convinced on hydrogen- my car of the future would have about a hundred mile battery range and about a 30Kw fuel cell as a range extender but the fuel has to be a liquid (propane, methanol etc etc)to me that's the sweet spot.

I agree completely, I have advocated this for years. To calm the fears of some about methanol I now advocate reforming cellulose ethanol on the car.

Auto companies aren't even sure which technology will win out in the future. To many variables. ICE and emissions technology is improving at a rapid rate. Fuel is improving carbon rating thanks to ethanol and biodiesel. The ICE may be the low cost energy source for the future. Also, the car may pollute no more than EC. I think we may see hybrids that obscure exactly what to call the vehicle. Taking a bit of each technology to lower cost and improve performance.

The grid has many problems. Very slow and costly to improve. So, this energy source is not the win win solution as often touted.

Hydrogen has more going for it as the long term solution. The gas has low distribution costs. This energy carrier is superior to wires and electric grid. The piping system solves the problem of remote wind remote hydro, and remote geothermal. It solves the energy storage problem of the grid and the complex problem of power to production balance. It's a universal energy carrier much superior to natural gas. All energy systems fit nicely within hydrogen. Hydrogen could be utilized to improve the grid and it will, but in the end the grid could be replaced. Meaning we would not have hydrogen light bulbs or AC but we would have fuel cell electricity. The end user would probably have an assortment of energy sources for the task such as batteries, fuel cell, and solar. CHP systems in the mix for efficient heat and power production.

FCEV technology has a wide birth of technology improvement horizon. In past auto companies were frustrated with such rapid improvements as the target moved so fast no reason to invest with production. Only lately has the technology matured to make this production per generation of technology possible. Manufacturers don't see such large improvements as compared with battery car. While batteries will definitely stay the work horse for maximizing efficiency they probably won't take over transportation. It will be interesting how much EV's can improve, but they have critical problems that limit their popularity. But the auto people are not discounting the solution. Most think a percentage of population will always prefer a vehicle they can refuel at home.

There is plenty of room for both technologies and/or a mix of both batteries and FCs.

The range of most current limited range BEVs could be expended to 500+ Km with a small FC. Using H2 for long trips instead of polluting bio/fossil liquid fuels would help to reduce pollution and GHG. Users should be given a choice between both technologies or mix to best meet their needs.

Automated selection AWD with smaller e-motors could maximize energy used and improve driving in many areas.

Now, invent an efficient method to produce and put in stock gazeous hydrogen made at home and in existing gas stations. Then put this gazeous hydrogen in cheap yank in normal combustion ice engine. forget these costly fuelcell-electric motors configuration. Im ready to upgrade my Hyundai accent with cheap hydrogen tanks add-on, that's it. All the kit for 3 000$, no more.

Reformers have improved since Mercedes did NECAR in the 1990s.
Fuels cell technology has improved as well, I think we can get E100 in gas stations like Propel on the west coast.

Hyundai/Kia is moving fast with better ICEVs, BEVs and FCEVs. If the current trend continues, their factories in So-Korea, China, EU, USA and many other countries will build the most competitve ICEVs-BEVs-FCEVs by 2020 or so.

So a $50,000+ FCEV is considered affordable and yet a sub $30,000 BEV from the same vendor is considered expensive? I'm not implying that the Ioniq is not expensive for a short range BEV but I don't think a $32K premium on a $22K Tucson is affordable. I could be wrong though.

Another interesting thing I find are the reactions of the proponent communities. Hyundai only committed to batteries for 600 Ioniq BEVs per month and seemed shocked by the overwhelming demand. Their battery vendor, LG Chem, could only increase their allotment to 900 per month. For their lack of commitment Hyundai is derided as the Ioniq is considered a compliance car. In contrast a soft target of 120 FCEVs per month has the FCEV community in a celebratory conga line.

FCVs can go 300 miles then refill in 5 minutes, they don't weigh an extra 600 pounds with all the extra batteries. Before anyone says batteries will improve real soon, consider the progress the last 5-10 years.

This new FCEV compares somewhat with TESLA s-100 AWD except with refill which is about 6 to 10 times faster and more range during harsh weather.

Don't forget that H2 must be delivered under high pressure up to about 10,000 PSI which means you are working with a containment cylinder that must be certified periodically and where a leak could become a bomb; EVs are simple, Hydrogen is complex, inefficient and dangerous.

I appreciate the science behind a FCEV; however, too many factors work against it becoming prolific as a personal vehicle.

H2 can be piped in (from very large producing H2 stations) at lower pressure and compressed at smaller distribution H2 stations on an as required level.

The total cost to equip a larger area (200 Km X 200 Km) with a few main stations and up 100 very quick fill sub-stations could be less than equivalent 1000 quick charge EV stations.