Volkswagen announced it will put the battery-electric I.D. BUZZ microbus concept into production. Volkswagen presented the concept at the Detroit Auto Show in January. (Earlier post.) The Chairmen of the Boards of Management of the Volkswagen and Volkswagen Commercial Vehicles brands, Dr Herbert Diess and Dr Eckhard Scholz, announced the decision today at the Pebble Beach Concours d’Elegance in California.

Within the framework of further development, Volkswagen has also set a launch date for the I.D. BUZZ, which is built off the Modular Electric Drive kit (MEB). The vehicle will arrive at dealerships in 2022, after the compact four-door I.D. makes its debut. With the I.D. BUZZ, Volkswagen is mainly targeting markets in North America, Europe and China. 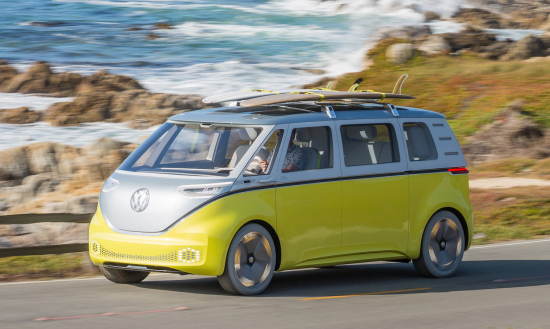 After the presentations at the global motor shows in Detroit and Geneva, we received a large number of letters and emails from customers who said, 'please build this car’. The Microbus has long been part of the California lifestyle. Now we’re bringing it back by reinventing it as an electric vehicle.

Just like the concept car that was shown in Detroit, the production model will also have its batteries mounted in the vehicle floor. Because the electric drive components don’t take up much space, the vehicle has a long wheelbase with short overhangs, allowing for a massively spacious interior and great proportions.

The I.D. BUZZ won’t just be a passenger vehicle. Just like the classic T2, the I.D. BUZZ will both haul people and haul freight.

Along with a minibus version, we’ll also be offering an I.D. BUZZ CARGO variant for zero-emissions delivery of goods. With Level 3 autonomous capability, this is an ideal concept for an electric van, particularly for delivering packages and goods to the inner cities.

The concept features an all-wheel drive system with a total output of 369 hp (275 kW) and an NEDC electric driving range of 600 kilometers (270 miles on a predicted US driving cycle). One electric motor at the front axle and one at the rear each deliver a power output of 201 hp (150 kW), distributed between the two axles by an electric propshaft. The I.D. BUZZ shown in Detroit can accelerate from 0 to 60 mph in about 5 seconds, with a governed top speed of 99 mph.

The vehicle’s 111 kWh battery can be charged to 80% of its capacity within 30 minutes using the Combined Charging System (CCS) or an inductive charging interface, with a charging rate of 150 kW.

Based on the new all-electric architecture, the production version of the I.D. BUZZ will incorporate many design ideas from the concept car, including multi-variable seating, interactive connectivity and highly automated driving.

I hope they build this one; but, how does it go?...I'll believe it when I can buy it! Last I heard they still have management problems between the ICE supporters and those wanting to go fully EV.

If they could add a high lift kit and sensible tyres.
There are so few electrified dirt road capable offerings considering that remote areas with worse roads have higher needs for private ownership.
Cities have the stronger market so the rest of us need to have patience.
Large and increasing numbers of remote dwellers have access to solar in significant quantity and the private vehicle with battery capacities as high as this would compliment stand alone or grid tied systems if they have V2G including micro or remote island.

With a 600+ Km range and a shorter recharge time of 30 minutes, we could be interested. A camper model could serve well for extended holyday trips, when ultra quick charging facilities become available alonside major highways.

Five years?!
VW needs to get serious about zero-emission vehicles. This stream of press releases and concept vehicles lacks substance. Here's an idea. Even though it is five years away, why not take $1000 deposits for the Microbus, just as Tesla has done. It shows commitment...and consumers can show their interest.

5 years is how long it normally takes one of the major German auto makers to set up a new platform and prepare everything for mass production, to churn out hundreds or thousands of fault-free units per day.

Another reason for the delay is that they are concentrating their efforts, including the staff with the necessary BEV-skills, on the Golf-sized I.D. - the right move by VW, in my opinion.