Interest in gasoline engined and hybrid vehicles has jumped in Germany while interest in diesel is falling, according to the latest biennial study on automotive buying trends in that country by leading German fuel retailer Aral.

According to the new Trends report, 52% of buyers want a conventional gasoline engine. Compared to the previous Aral study, this corresponds to an increase of 10 percentage points. Diesel came in a distant second with only 18%; two years ago, 31 percent of the respondents identified diesel as their choice. Hybrids now come in at 15%, up from 6%.

Although 55% of respondents indicated interest in an electric car, only 5% said they could image buying such a vehicle. According to the survey, car drivers expect an average range of 463 kilometers (288 miles) per charge, with 60% of respondents saying a charging time of up to 30 minutes was the maximum acceptable.

Electric car intent varied slightly across the demographic segments. Men were more interested than women (6% vs. 4%), with the same percentage distribution between younger and older (6% vs. 4%). 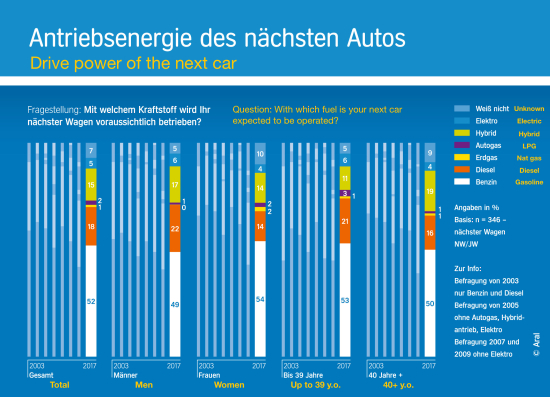 Other findings from the survey:

Wow! They've really gone off diesels in Deutschland.
Can't help the used value of the existing diesels, I would surmise. Maybe they can be sold to the Poles, etc. (used).
Interesting too the range required for EVs - probably all that autobahn driving. They'll be lucky to charge in 30 minutes, even if they have a 150 KW charger.

It show that what i said to do is more and more put in practiced. i.e buy a small gas car and keep it for a long time and drive it slow

Hi Gorr,
Not a bad approach, if I may say so.

It seems the headline should read "Germans most interested in Electric cars".

The range expectation would seem surprising to the casual observer or American until it is explained that since this is Germany they are thinking in terms of NEDC and the 288 miles NEDC translates to about 200 miles EPA. The cars that most Germans can't imagine will be coming in 2018 and 2019.Those include the Ampera-e (Chevy Bolt), the Tesla Model 3, the longer range Nissan Leaf, and the longer range Hyundai Ioniq. I'm sure there will be others. Niro, iPace, et al.

After they have some real world experience with the cars they can't imagine (like Californians and Norwegians) they will likely come to realize that most only need 250-300 km of real world range. That assumes the availability of fast charging (100-150 kW) infrastructure. More capacity may be desired for harsh winter conditions.

What is encouraging for electrics is that Germans are willing to wait 30 minutes for a charge while Americans that figure is 20 minutes. Batteries that can handle 100 kW charging should easily satisfy their 30 minute requirement. At 150 kW heavier less efficient vehicles will also meet the 30 minute expectation.