The APP can be use on-demand, activated any time when necessary. The APP thus makes canister purging available independent from the engine operation point and vacuum availability. Further, APP’s main function can be extended by integrating algorithms to provide additional functions that either require stand-alone products today or are not even currently available. Start of production is planned for end of 2019. 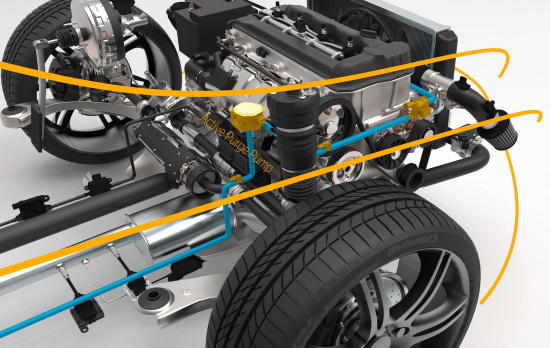 Gasoline fuel evaporates easily. The evaporative hydrocarbon fumes—which contain benzene—pose a health hazard when inhaled and in combination with sunlight and exhaust gases they can cause photochemical smog. Modern gasoline cars thus have a system onboard to minimize hydrocarbon emissions. A canister filled with activated carbon is used to collect all fumes from the tank; the canister with the accumulated hydrocarbon (HC) needs to be flushed or purged from time to time. The flushed air content, rich in HC, is fed forward to the intake manifold and flows into the combustion chambers where it is burned. This system has greatly reduced evaporative HC emissions.

However, the legislation on evaporative HC emission is set to become much more strict around the world over the next four to five years. Furthermore, purging the HC canister is currently done by using the vacuum generated in the intake manifold of a gasoline engine during part-load operation by throttling.

In highly efficient gasoline cars there is less or no vacuum available, though, because throttling is inefficient—the engine’s thermodynamic efficiency is reduced by throttle losses—and is avoided wherever possible. In a gasoline mild hybrid car the engine may not be running at up to 20% of the driving time—so no vacuum.

The need for higher engine efficiency is beginning to make vacuum a rarity in gasoline cars. As a result it is becoming more difficult to flush the HC canister because often the boundary conditions will not allow this.

The biggest benefit of the APP is that we can use it on demand, and activate it any time when it is necessary. This makes the APP a perfect match for turbocharged engines which are run at higher loads more often, de-throttled engines, start-stop and hybrid powertrains with long engine-off periods.

Actively purging the canister is only the core function of the new solution. Additional software modules and some additional hardware (such as valves) will make further functions available. Among these are a high-performance leak detection and a measurement of the HC content in the purged air.

Additional functions like these make the pump the core of an Active Purge System (APS). For instance, determining the HC concentration in the purge air is needed to adapt the amount of fuel injection during part load or idling.

Tank leak detection, on the other hand, is currently a stand-alone system which has to be integrated separately. Making this part of an Active Purge System built around the existing Active Purge Pump is more efficient. To support the trend to higher system integration levels, the required APP and APS functional content can be flexibly combined from hardware and software components.