BASF and bse Engineering have signed an exclusive joint development agreement for BASF to provide custom-made catalysts for a new chemical energy storage process. This process will enable the economically viable transformation of excess power and off-gas carbon dioxide into methanol in small-scale, decentralized production units.

In addition to being used as a fuel or chemical feedstock, methanol, the simplest alcohol, can serve as long-term chemical energy storage. It offers energy densities of 4.4 kWh/l—almost six times that of hydrogen—and 5.5 kWh/kg—about 20 times the specific energy of advanced Li-ion batteries with silicon anodes. Put another way, 1 cubic meter (264 gallons) of methanol offers equivalent energy storage to 222 BMW i3 EVs, each with a 21.6 kWh battery.

Renewable energy sources such as wind or solar power plants generate excess current at times when it is not needed. This excess current can often not be reasonably used, but effective usage of this excess is a factor in making power production from renewable energy sources economically viable. The new process developed by bse Engineering enables the sustainable use of current and CO2 with small-scale, decentralized production units built where the two components are generated, i.e. near power plants using renewable sources of energy as well as large-scale industrial plants producing CO2.

In the process, excess electricity is used to produce hydrogen through discontinuous electrolysis. In a second step, methanol is produced via the catalytic, exothermic reaction of CO2 and H2.

BASF’s catalysts will be used for the methanol synthesis step. These catalysts have been further tuned and adapted for this specific process to enable the efficient production of methanol. 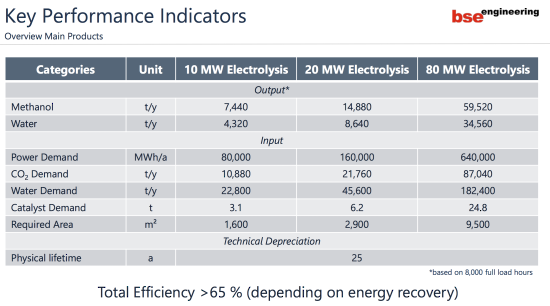 After four years of developing the global process concept, we are now ready to enter the licensing phase of this process, with construction of the first plants starting soon. The implementation of these projects is ensured with international branch leaders of the respective process units and part-services over a reliable consortium consisting of Aker Solutions ASA, Sulzer Chemtech AG, InfraServ GmbH & Co. Knapsack KG, led by bse Engineering. We are very proud to work on the key technology catalysts with an experienced and innovative industry leader like BASF to make our vision a reality.

bse engineering was part of the German project Bio-M to produced methanol from CO2 and green hydrogen produced via renewable energy. Funded by the German Federal Ministry of Education and Research (BMBF), Bio-M ran from 1 October 2015 to 30 June 2017.

bse Engineering envisions the first rollout of a 10 MW power-to-methanol plant in 2019/20.

Data on efficiency would be useful, but OTOH this is specifically for otherwise wasted power, so dependent on cost at least at a small scale it would still be handy.

You could blend the methanol into petrol (up to 3% in the Eu).
+ it looks like it needs quite a bit of land.
or use it in a fuel cell?

The low efficiency and expensive input means costly product.  There are better ways, but apparently the goal is to "greenwash" and never actually compete with fossil fuels effectively.  This is exactly what you'd expect if the whole effort is a front for the fossil fuel interests themselves.

Power which is currently thrown away is not 'an expensive input'.

'This process will enable the economically viable transformation of excess power and off-gas carbon dioxide into methanol in small-scale, decentralized production units.'

Note: 'excess power' of which there is already substantial amounts due to the intermittency of renewables.

Whether that renewable power should have been built is another issue, but wince it has, it makes sense to use it if possible rather than chuck it away.

When you're doing this at a scale sufficient to actually be "renewable", something like half of your electricity is going to go through storage.  Making methanol for motor fuel means even more will be.  When the majority of your generation is going into these sinks, it's not "excess" any more.  It's the main product, and it has to be paid for.

Reforming bio methanol like NECAR for FVs from cellulose would be more sustainable mobility.

This can be considered using (value based) *metrics. While not maths or science which disallows mixed *metrics, it is nonetheless a recognised comparative tool.

If we use E.P's numbers(50% e energy recovery) then the articles quoted 20X storage per *volume* of (current) Lipo with a 50% efficiency loss to the tank.
Battery cycling losses should be within 10% and so are not significant compared to I.E. grid transmission losses/ other.

For a comparitive adjustment to 10X (eff/v.)*

We should also consider that creating and utilising (cycling) methanol is an industrial process consumed in purpose built devices I.E. I.C.E. or F.C. whereas a battery can be charged directly by any generator without extra dedicated infrastructure and it can then be used in any electric machine. Electric machines are universal in scope and will use any available power source with standard form.

If this can reuse CO2 at source I.E. steel or cement making that is useful but if it follows that the recoverable work is half as much as for directly generated power even when cycled through a Lithium or similar efficiency storage battery then it would seem a circuitous route to the starting point.

So this hybrid renewable/ fossil fuel to energy storage becomes a way for accountants to claim renewable and recycled CO2 to reduce the carbon footprint 'using renewable electricity surplus?