UK-based ULEMCo has developed a fuel-cell-based unit that will extend vehicle range by supplying additional power to the standard Nissan e-NV200 van. With the combination of the on-board hydrogen storage and fuel cell module, the van will have a range of more than 150 miles (241 km) when laden, satisfying the range requirements of most average daily delivery operations for this size of van.

ULEMCo specifically engineered the module to provide additional energy to the vehicle so that the operational practicality of the full electric vehicle can be widened to cope with seasonal range variation, working lifetime, and the impact on range when fully loaded—all things that currently limit the range of duties an operator can target for existing for zero-emission commercial vehicles. 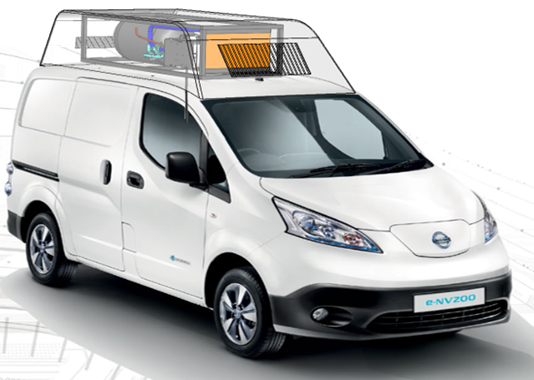 Using a 12kW fuel cell and 1.6 kg/day on-board hydrogen storage capability, the van will have almost twice the range of the standard e-NV200, measured to NEDC standards, without sacrificing load space capacity.

ULEMCo’s fuel cell RX power module will be roof mounted, and provide motive power via the battery to support the drive load requirements for the base van.

The OLEV Hydrogen for Transport Programme was launched last week to provide up to £23 million (US$29 million) of new grant funding until 2020 to support the growth of hydrogen refueling infrastructure, alongside the deployment of new vehicles via an open competition for both Hydrogen Refueling Stations and hydrogen fuel cell vehicles.

ULEMCo Ltd was founded in 2014 as a spin out of Revolve Technologies to commercialize intellectual property and capability in hydrogen combustion engine technology. The company retrofits vehicles, starting with diesel Ford Transit vans to enable them to run on commercially available hydrogen. The technology allows vehicle fleet managers to reduce their carbon dioxide emissions to ultra-low levels.

Pem-FC + batteries can extend all weather range of this type of combo to 1000+ Km, with enough onboard H2.

Secondly, this type of combo can be CO2 neutral where electricity and H2 are made with REs such as Hydro, Wind, Solar and/or Nulear.

This vehicle could also supply the owner's home with enough essential electricity for many days during grid failures.

The fuel cell seems awfully bulky though I presume its not that heavy. I suppose if one were going off grid you could use the fuel cell as a back-up generator for those extended periods of low solar production. not sure about cost though?