At the Chengdu Motor Show, Cadillac launched a version of the XT5 SUV equipped with a mild hybrid system, the first of its kind for the brand. It also adds a new nine-speed automatic transmission. The XT5 is one of Cadillac’s most popular models in China. More than 63,000 units have been delivered since its local introduction in April 2016. 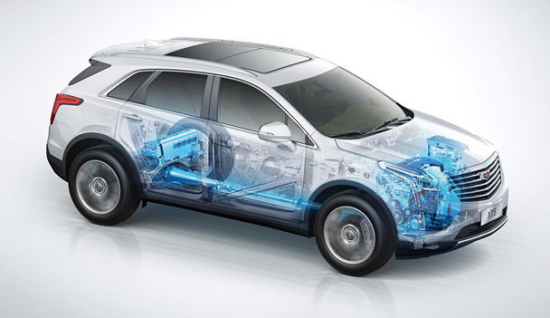 The nine-speed automatic transmission strikes a balance between high performance and efficiency. It is calibrated especially for road conditions in urban areas.

The transmission adds one gear for the low- and medium-speed range to increase the low-speed gear ratio, allowing the XT5 to move smoothly on congested roads. At full throttle, the transmission upshifts more swiftly to ensure seamless, faster acceleration. With Electronic Transmission Range Selection (ETRS) technology, the transmission automatically switches to park after the engine shuts down.

The combination of the intelligent mild hybrid system and the latest nine-speed transmission has reduced fuel consumption to 7.9 liters/100 km (30 mpg US).

Additional updates include the Cadillac User Experience (CUE), a simplified and intuitive user interface with optimized functions. It monitors the mild hybrid system, allowing the driver to keep track of power flow. Users can also listen to their favorite music and programs via onboard infotainment apps such as NetEase Cloud Music and Kaola FM. Cloud-based apps provide convenient access as well to information about authorized dealers and service facilities.