On 27 October 2016, the International Maritime Organization (IMO) announced that beginning on 1 January 2020, the maximum sulfur content allowed in marine bunker fuel will be reduced from 3.50% mass by mass (m/m) to 0.50% m/m (35,000 ppm to 5,000 ppm)—five years earlier than many expected. (Earlier post.) The IMO fuel sulfur content regulation will have a significant global impact on both the refining and the shipping industries.

Owing to uncertainty around the implementation date and the ultimate level of compliance, neither the global refining nor shipping industries have as yet made the necessary investments to comply fully with the IMO rules. As a result, both industries will experience rapid change and significant cost and operational impacts, according to new analysis from IHS Markit. 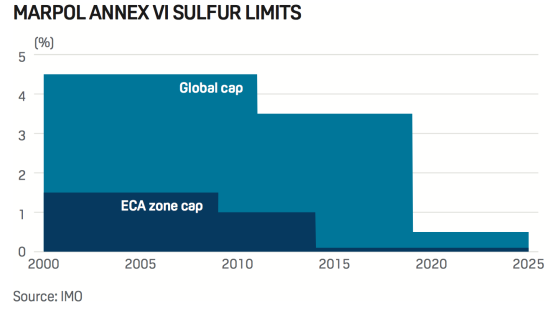 Heavy fuel oil (HFO) is the predominant marine fuel. It is viscous, dirty, inexpensive and widely available. Because of its high sulfur content, maritime shipping accounts for 8% of global emissions of sulfur dioxide (SO2), making the industry an important source for acid rain as well as respiratory diseases.

While the IMO is taking positive action to address the environmental impacts of air pollution from ships, the rapid change creates significant disruption for both the refining and shipping industries.

Shippers will face significant compliance costs by having to upgrade equipment or switch to more expensive fuels. Refiners will experience significant price impacts as they shift production to deliver more lower-sulfur fuels to the market and, at the same time, find a market for the higher-sulfur fuels they produce. Refineries, like ships, do not turn on a dime, so it takes significant investment and market demand to retool a refinery to deliver new supply.

Barrow, along with Sandeep Sayal, senior director of refining and marketing research at IHS Markit, are two authors of an IHS Markit report entitled Refining and Shipping Industries Will Scramble to Meet the 2020 IMO Bunker Fuel Rules.

The two industries are vastly unprepared. Neither has made the necessary investments for compliance, which means that the 2020 implementation date will result in a scramble. Both industries are taking a wait-and-see approach until firm signals are in place by the IMO for compliance with the regulation.

Shippers will have several options to meet the new IMO regulations, IHS Markit said. Low-sulfur bunker fuels (primarily for smaller vessels), and liquefied natural gas (LNG) (primarily for new builds) will be part of the solution. However, IHS Markit researchers expect that on-board ship scrubbers, devices that clear harmful pollutants from exhaust gas, will be the primary compliance path for ships, which could continue to burn higher-sulfur fuels.

From the shipping industry point of view, IHS Markit estimates that about 20,000 ships account for around 80 percent of heavy fuel-oil bunker fuel use. Currently only about 360 ships have installed scrubbers, since there is currently no economic incentive for the ships to add scrubbers. However, based on the price spreads between low-sulfur bunker fuel and high-sulfur fuel oil during the scramble period, it will be economic for many of them to install scrubbers.

The payback period for installing a scrubber on the largest vessels would be two-to-four years in 2022-2025, and less than one year based on peak-price spreads in 2020, Atkinson said.

A key uncertainty also lies in the actual level of compliance to the IMO regulation in 2020.

Overall, the installations of scrubbers and some level of noncompliance will not be in time to halt the disruption on refined products markets, IHS Markit said. According to the IHS Markit report, the primary challenge with the bunker fuel quality change is the disposal of high-sulfur residual fuel—not the production of low-sulfur bunker fuel.

When we account for all the supply and demand factors for the sour residual balance, including new conversion projects, capacity creep, scrubber and LNG capacity, as well as quality compliance, our bottom line is that a sizable portion of today’s fuel oil will be pushed into lower-price tiers, notably oil-fired power-generation plants. Refining capacity will most likely exist in 2020 to produce the low-sulfur bunker fuel, but higher overall crude runs will be required.

The largest refinery margin disruption will be significant but fleeting, according to the IHS Markit report, with impacts felt most notably in 2020 and 2021. IHS Markit expects an unprecedented light-heavy price spread during 2020 to 2021. During these years, pricing for high-sulfur fuel oil (HSFO) will have to be near thermal parity with coal to clear into the power market—a very low price relative even to today’s fuel oil price, IHS Markit said.

As ship owners respond to the large-scrubber investment incentives, high-sulfur bunker fuel demand will rebound, although not to prior 2020 levels. Due to increasing demand and addition of debottlenecking capacity for residue conversion, IHS Markit estimates price spreads will moderate within a few years, but the timing of price recovery will be dependent upon a number of variables.

Crude-price relationships, specifically between light-sweet and heavy-sour crude, will widen around the compliance timeframe, IHS Markit said. Assuming the specification change implements as announced on a global and instantaneous basis with no phase-in timing or quality transition allowances, the margin uplift will be acute in the compliance period from 2020 to 2021.

Finally someone is moving to reduce SOX emissions from the worse polluting devices on the Planet, huge diesel powered ships. But, it's not enough and they should address all the pollutants like NOX, CO2, etc., and start now to control the emissions by switching them to CNG and then to hybrid electric propulsion.

15 container ships pollute the air more than all the cars on Earth and there are a 100 plus of these dirty monsters at sea.

And to think that animal agriculture is an even greater source of air pollution (methane mainly) than ALL transportation combined, including these ships.

You can't be "green" when you eat animals.

120F is detrimental to human health.