The ASDS is installed in the spare wheel well and the SCR catalyst is fitted to the exhaust pipe under the car. BlueFit does not require any changes in the engine compartment, the engine calibration, the diesel particulate filter or the electrical power system. 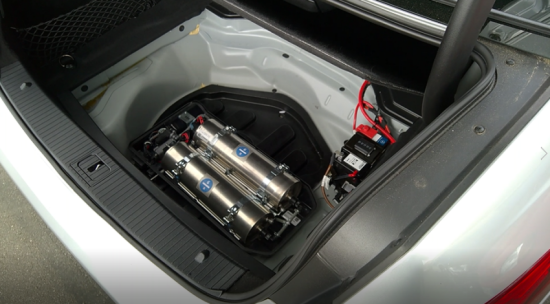 The standard BlueFit configuration has two compact cartridges with solid ammonia, equivalent to 16 liters of AdBlue. The driving range will be around 15,000 km before it is time for a two-minute cartridge exchange at a workshop. Some car models have room for a third cartridge, potentially extending the driving range to more than 20,000 kilometers.

In an independent testing at the University of Graz, Austria, a 2014 mid-sized diesel car with a 1.5 liter engine (Euro 5) was retrofitted with BlueFit. Professor Stefan Hausberger’s group measured the emissions before and after using standard PEMS (portable emissions measurement system) equipment to record emissions under real driving conditions.

The Euro 5 standard allows for emitting 180 mg NOx per kilometer, but the baseline measurements of the car showed emissions ranging from 800 mg (summer) up to 1300 mg (spring) NOx per kilometer— a factor 4-7 more than the limit.

The PEMS test show that BlueFit effectively removes around 95% of all NOx from the Euro 5 car. The BlueFit-equipped car now emits just half of the NOx allowed by the latest Euro 6 standard, and it will be eligible to get the proposed Bluesticker and enter the Low Emission Zones.

In addition to the PEMS test, Amminex is continuously logging system performance on all equipped vehicles to an online database. The results are updated in real-time and are available to the public through the NOxTracker app for Apple and Android phones. The data shows that the technology is especially efficient in slow, urban driving, after cold start and in cold weather. These are conditions under which an effective NOx reducing solution is particularly needed.

Amminex is owned by French automotive supplier Faurecia (91.5%) and Nordea-Fonden (8.5%).

If it is not specifically calibrated with the engine/vehicle, I would be concerned about ammonia break-through. High ammonia emissions can increase ambient concentrations of nitrate particulate matter.

GreenGopher: The tailpipe NOx sensor after SCR catalyst is cross-sensitive towards ammonia and the feedback-dosing-strategy ensures a low signal thereby keeping both NOx and NH3 low. Br. Tue, CTO of Amminex.

Good to see solutions to the errors of the large auto manufactures cost cutting and deception.
Also good to see company spokesperson following public interest.
There are three or five problems that are not completely addressed by this approach so I would say a bandaid rather than solution.

Practical problem as to where to locate the spare tyre without losing boot capacity.

Does nothing for particulates.

Cost. These types of after market products cannot be supplied and fitted without considerable expense. Maybe cheaper than scrappage but not likely an option for the average financially abused and disillusioned consumer.

That owners of these and especially E.European commercial diesel vehicles are known to disconnect (Ad Blue) functions with ECU re-chipping. What confidence can be had that this activity would cease even after these solutions are adopted?

Dear Arnold,
The typical Euro 5 car already has DPF installed (with diesel oxidation catalyst in front of it) installed - but not an AdBlue system. Adding the SCR-function via the catalyst mounted in the exhaust section under the floor of the vehicle and the solid ammonia system in the 'trunk' gives the required control of NOx. After the upgrade, both NOx and particulates are OK. The lost space for spare-wheel can be managed by a standard flat-tire-pump-kit. The installation would be done in less than a normal working day (like we do even for big city bus retrofit) and given the outlook of need for high volume of eligeble cars, the price for the kit will land at a level that makes it worth for at least a major part of the vehicles with substantrial remaining value. The added annual operating cost for 'replacement' cartridges (equivalent of AdBlue refill) will be quite limited. Best regards Tue.

... and in addition: Retrofitted vehicles can have on-line monitoring: http://www.amminex.com/retrofit/noxtracker-trade.aspx
Results can be displayed on apps.

I would like to find out if there has been any progress in this development?