At the Frankfurt Motor Show next week, Mercedes-Benz will display publicly for the first time the pre-production version of the Mercedes-Benz GLC F‑CELL fuel cell plug-in hybrid. (Earlier post.)

The GLC F-CELL features a ~9 kWh lithium-ion battery pack combined with a new fuel cell stack. Around 30% more compact than previous stacks, it can be fully housed in the engine compartment for the first time. Too, the cost of the technology has been slashed due largely to a 90% reduction in the amount of platinum used in the stack. The combination of fuel cell and battery system—along with a further developed intelligent operating strategy—will offer a combined range of around 500 km (311 miles) in the NEDC. 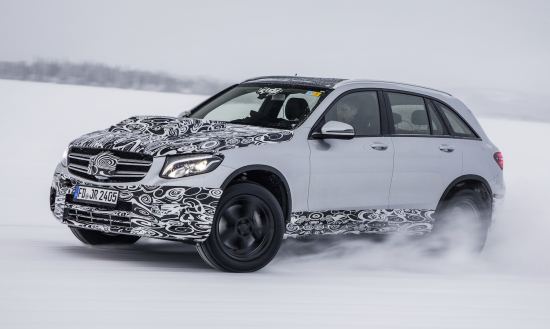 Fuel cell technology remains an integral part of Daimler’s powertrain strategy. Mercedes-Benz has already gathered experience with hydrogen-powered electric vehicles over several vehicle generations. To date, the fleet of Daimler fuel cell vehicles, including research vehicles, numbers more than 300 and has collectively covered nearly 18 million kilometers. The next generation of fuel cell vehicles from Mercedes-Benz is currently being developed based on the GLC.

Intensive functional and fatigue testing of individual components and later also of the complete test vehicles on a host of test rigs speed up the development process. The Fuel Cell Centre of Competence Nabern east of Stuttgart is playing a crucial role in the GLC F‑CELL. The fuel cell experts have used about 200 tonnes of hydrogen in their developments tests since 2015. The only exhaust gas emitted was water vapor—1800 tonnes of it in all. 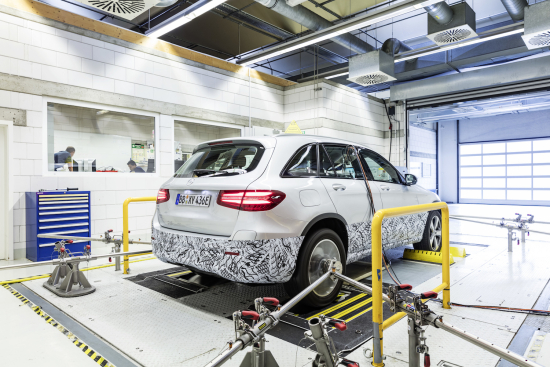 The Vehicle Safety Technology Center (TFS) offers entirely new possibilities for testing vehicles with alternative powertrains, vehicle-to-vehicle tests or for the design of assistance systems and PRE‑SAFE. The GLC F‑CELL received its aerodynamic finishing touches in the wind tunnels in the Mercedes-Benz Technology Center in Sindelfingen: Even the most extreme weather events can be moved indoors here. Temperatures ranging from minus 40 to plus 60 degrees Celsius, hurricanes with wind speeds of up to 265 km/h (165 mph), tropical downpours and heavy snowstorms are all part of the standard repertoire available to the test engineers.

After the first prototypes were roadworthy, the summer and winter road testing of the GLC F‑CELL began. The vehicles were driven on the proving grounds in Spain (IDIADA near Barcelona), Sweden (Arjeplog) and Germany (Boxberg), among others. The road tests also took the test teams to the Sierra Nevada (Spain) and the low mountain ranges of the Schwäbische Alb and the Black Forest in Germany. The test program comprised more than 500 individual tests, which in addition to the standard test regimen for all vehicles also included special tests for the electric powertrain, the fuel cell, and the interplay of all powertrain components.

Safety. The safety experts built on almost 30 years of company experience with fuel cell vehicles. The engineers focused on the integration of safety-relevant components such as the hydrogen tanks, the gas seals and valves, and the high-voltage components.

The hydrogen tanks are installed in the crash-protected area between the vehicle axles and are protected additionally by a subframe wrapped around the tanks. For the event of a crash, additional extensive measures were implemented—for example, a multi-stage valve system as well as special protective circuits for the high-voltage system.

The crash tests conducted with the pre-production GLC F‑CELL and earlier hydrogen vehicles show that the engineers achieved a level of safety comparable to that of conventional vehicles. As a result, the latest F‑CELL generation complies not only with all statutory requirements, but also with the even more rigorous Mercedes-Benz in-house standards.

A 500+ Km range Hybrid (Batteries + FC) would be a good solution for an all round clean running vehicle.

Of course, an AWD Hybrid with about 20-30 Kw battery pack for city use and a 60 to 100 Kw FC for Highway use would be ideal if the price is reight?

Users without charging facilities at home could quick charge once a week with electrons and H2 at public stations.

300 miles range for an EV might be 1400 pounds of batteries, this could be half that weight for tanks, fuel cell and batteries.

9 kWh LiB implies this may be a plug-in which would make a LOT of sense. They didn't mention the output of the stack which might give it away if it is a plug-in . The range seems low though. 300 miles NEDC is likely not much more than 200 EPA ...particularly f you're starting off with 20-30 miles of battery.

Produce the fuel from surplus electricity and I'm in; Produce it by reforming fossil fuels and it's a huge jump backwards for the health of the planet. However, not for cars and trucks; hydrogen from electrolysis makes a good fuel for gross polluters like ships and airplanes.

Big rig trucks are huge polluters, the fuel cell used in the Nikola One can help.

A combo vehicle (batteries + FC) could stop the endless argument about BEVs versus FCEVs?

Nikola new trucks represent the application of that solution.