Home About Contact RSS GCC Twitter Newsletter
Toyota to focus on hybrid technology at Frankfurt
Mercedes-Benz Vans sets up on-demand van-ride-sharing JV with US start-up Via; Daimler invests $50M in Via

The hydrogen fuel cell scooters will be used by Police Community Support Officers within the Roads and Transport Policing Command and will be based at Alperton Deployment Centre. The trial will last for 18 months and will enable assessment of the suitability of the fuel cell scooters for various roles. On a broader scale the trial will help The Metropolitan Police to understand where this clean technology could be adopted across its fleet in the future.

The Burgman Fuel Cell scooters are not yet commercially available. The MPS is the only organization outside of Japan that Suzuki has approached to undertake such a trial. These scooters will be fitted with telematics to enable Suzuki to gather data on the scooters systems to assist further development. 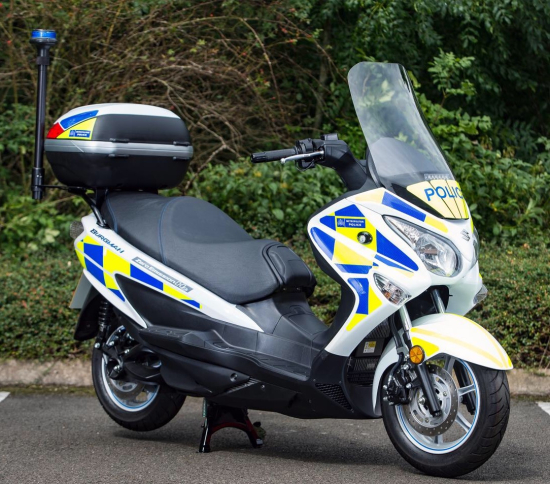 The trial is being run at no cost to the Met, with the loan of the vehicles from Suzuki Motor Corporation. The maintenance and fuel costs will be met by a collaborative project which is being part funded by the Advanced Propulsion Centre (APC). Lead partner of this project is British fuel cell technology company Intelligent Energy in association with Suzuki GB and Cenex.

This trial complements a Metropolitan Police Service decision made in late 2015 to stop mandating diesel fuel for its fleet. Since then, it has been actively exploring ways to hybridize and electrify its fleet in addition to exploring other new technologies such as hydrogen. This is enabling The Metropolitan Police Service to make great strides towards its ambition of procuring 550 vehicles as zero or ultra-low emission by 2020 while ensuring a 24 x 7 fleet operational capability.

The hydrogen powered scooter trial follows the Greater London Authority (GLA) signing a letter of intent in March 2016 with Suzuki Motor Corporation to test these vehicles as a patrol vehicle within the Metropolitan Police Service (MPS) Fleet.

The scooters will be located at a central London location and will be re-fueled using a private re-fueling station provided by Fuel Cell Systems. This mobile re-fuelling facility enables the scooters to be deployed elsewhere, or on deployment for long periods, as required.

The Suzuki Burgman Fuel Cell has a range of around 120 km (75 miles) before refueling is required.

Intelligent Energy and DIGIMAN. In May 2017, the EU launched the €3.5-million DIGIMAN program to provide a blueprint to enable fully automated future mass manufacture of fuel cell stacks for the automotive market. (Earlier post.) Intelligent Energy is the program’s technology lead with overall coordination provided by CEA Tech-Liten. The two companies will front a pan-European industry group to further commercialize fuel cells for the mass automotive market.

Also involved in the three-year program are Freudenberg Performance Materials SE&Co.KG, WMG at the University of Warwick, and Toyota Motor Europe. The latter will be responsible for best practice requirements for future automotive stack production. Project management support and communication activities will be provided by the SME Pretexo.

75 miles and 4Kw of power does not sound like much for a police bike - I assume they charge a battery to get more power for acceleration.

"Metropolitan Police Service decision made in late 2015 to stop mandating diesel fuel for its fleet" - all well and good, but the bikes would have been petrol in the first place.

Getting rid of diesel from urban areas is a good thing, but there is no need to throw the baby out with the bathwater.

@ mahonj:
Mobile application of a FC without a battery is an absolutely no-go. A battery can definitely operate without a FC but not vice versa.

Here are the specs:
http://www.intelligent-energy.com/uploads/accompanying_files/Burgman_case_study.pdf

They pump out one heck of a lot of pollutants.

75 miles is a lot in London. This isn't the California Highway Patrol.

OK, so existing petrol scooters generate a lot of pollutants and 75 miles is enough for London ... as long as you don't end up in a pursuit.

There are other vehicles for pursuit.

Pursuits will soon be more effectively and safely done by drones.

This is a first generation of mass produced clean FC scooter with limited power and limited range. Second and third generation units with improved battery and FC will do much better?

Another alternative would be to use electrified ADVs to chase and/or to block gangsters and other get aways, without endangering police force life.