Scheduled for volume production in 2019, the Transit Custom PHEV has an advanced series hybrid system that targets a zero-emission range exceeding 50 kilometers (31 miles), and features the multi-award winning Ford EcoBoost 1.0-liter gasoline engine as a range extender. The EcoBoost engine charges the on-board batteries when longer trips are required between charging stops, providing operators with efficiency and flexibility. 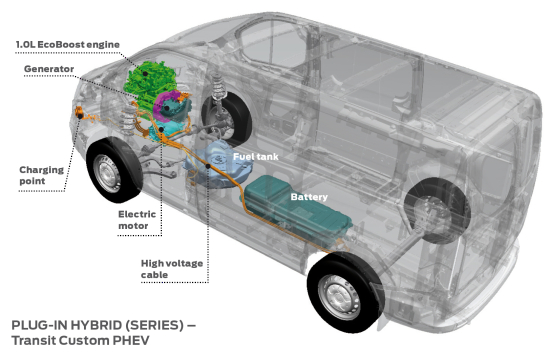 The battery pack is a compact liquid-cooled lithium-ion design located under the load floor, preserving the full cargo volume offered by the standard Transit Custom van.

The PHEV approach provides city-based commercial vehicle operators with a range of benefits. In addition to the zero-emission capability exceeding 50 kilometers, the Transit Custom PHEV uses gasoline for a target total range of more than 500 kilometers (310 miles). The PHEV also has an increased payload capacity compared to battery-only electric vehicles, and the ability to offer quick and easy recharging from a standard electricity supply.

The London fleet trial project is supported by Transport for London, and features a cross-section of city-based businesses, including Metropolitan Police, that will integrate the vans into their day-to-day operations. To help understand how the benefits of electrified vehicles could be maximised, the 20 PHEV Transits will use an advanced telematics system to collect real-time data on the vans’ performance.

In addition, the vehicles will feature geofencing technology, which is capable of automatically modifying vehicle settings based on each van’s current location. This could be used, for example, to ensure the hybrid system is switched to electric-only mode when a vehicle enters a low-emission zone within an inner-city area.

Cleaner vans, like those being used in this trial, will be vital in helping the freight and fleet sector to reduce the emissions and play its part in tackling the Capital’s air quality crisis. We are also using the data from the trial, which will be an invaluable resource for our LoCITY program that encourages commercial businesses to use greener vehicles.

Development of the 20 Transit Custom fleet trial vehicles has been supported by a £4.7-million (US$6.1-million) grant from the UK Government-funded Advanced Propulsion Centre. The vans are being designed and engineered at Ford’s Dunton, U.K., technical centre, and at Prodrive Advanced Technology in Banbury, U.K., with program support from Revolve Technologies.

Seems to be a good first/early solution for fuel saving Hybrid Van. Has enough under floor space for more batteries to extend electric range?

Future upgrades with higher energy batteries would be another alternative to increase electric range?

A hand to Ford and UK Government!

I could use this. And yes Harvey, there is room for more batteries: These vans have a spare wheel under the floor between the rear axle and bumper. That could be hung on one of the back doors and a battery pack put in its place. That would bump the electric range up to 80 km easily.

It all looks good to me.
Test quickly and start mass producing as soon as possible.
And keep them affordable.

What I'd like to see is a PHEV Transit with the long wheel base & high roof. It could be outfitted like a RV and the battery could also be used for house power. A battery with a 30 mile range would make for weeks of boondocking.

They are testing these for a year...smart!