Now, after 18 months of testing 60 vehicles with more than 430 road tests covering more than 40,000 km (24,854 miles), the partners have published a report on their real-world fuel economy findings. The tests performed on passenger cars reveal an average fuel consumption of 5.8 liters/100km (40.5 mpg US), and confirm an average gap with official type approval figures of 1.74 l/100 km. The results that show PEMS tests provide a robust, representative and repeatable basis for measuring real-world fuel economy and CO2 emissions. The results are accurate within 0.3 l/100km. 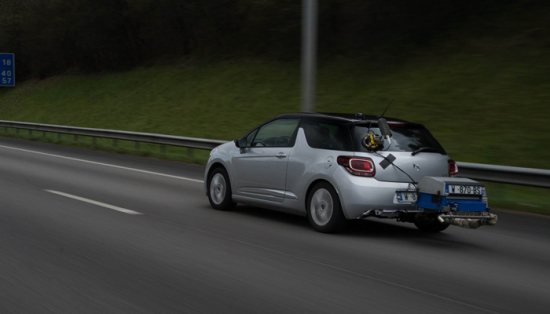 The results show that for an average car achieving 6 l/100 km measured using the Protocol, there is a 10% deviation from Worldwide Light Vehicles Test Procedure (WLTP) measurements (which did not fully reproduce the test procedure); a 3% deviation with an adjusted WLTP (including more urban driving) and 42% with the New European Driving Cycle (NEDC).

The test protocol is highly reproducible with a margin of error of just ± 3%. The roughly one thousand results not only match internal PSA data from their customers but also the information uploaded by drivers themselves onto public web-based data sets such as Germany’s www.spritmonitor.de. The Spritmonitor results are within ± 0.2 liters per 100 km driven.

Although inspired by the Real World Driving Emissions (RDE) legislation now used to meet the Euro 6 emission standards the Protocol is more robust and provides insights into how representative of real-world driving the RDE tests are, according to the report. One of the key factors affecting RDE test results is the driving style that is defined using dynamic boundary conditions. The test results show that even the most passive driving styles used during the tests (including those considered far too passive to be part of a legitimate Protocol test) are permitted by the RDE test and, importantly, that the measurement is not subsequently adjusted to take into account of the low relative positive acceleration (RPA).

All data needed in the Protocol is collected via the PEMS, GPS and weather station. No connection with the Electronic Control Unit (ECU) via on-board diagnostics (OBD) is allowed prior to and during the test. This reduces the risk of the car detecting that it is being measured.

Only CO and CO2 are measured. Only the CO2 measurement is used to derive fuel economy as the CO and HC have a negligible effect. NOx and Pn measurements began this summer.

For PSA, the purpose of this Protocol was to give full and transparent information to customers regarding the real-world fuel consumption of Peugeot, Citroen and DS models. The measurements obtained on the 60 models make it possible to estimate the consumption in real-world driving conditions of more than 1,000 versions of Peugeot, Citroën and DS vehicles. For each model, the estimates have been made using the same engine and gearbox, plus three variants: body type, trim level and tire size.

Peugeot, Citroën and DS brands offer their clients the possibility to check their average consumption in real-world driving conditions by logging onto their respective websites. A web-based application allows them to view this data for their model by entering its characteristics (body type, trim level, engine, gearbox and type of tires).

Customers can also estimate their own consumption based on the actual use of their vehicle (number of passengers, load, driving style, etc.). The application is now available on the brands’ websites in 12 European countries.

The Protocol developed with T&E and FNE is a reliable response to the questions our customers may have concerning their consumption. They can access comprehensive and transparent fuel consumption data audited by Bureau Veritas. We will add the first figures for NOx emissions by the end of 2017.

These real-driving tests show that it is perfectly possible to achieve CO2 emissions and fuel consumption figures almost identical to those obtained by drivers on the road. But real-driving tests are only part of the solution to the emission cheating scandal. The upcoming EU decisions on how and who approves cars for sale will be key to ensuring the system of testing and approving cars is independent and rigorously enforced.

Maybe because it was new in March?

Ah! I have just remembered, I always have the air con on!

Quite a hit, if that is what is causing the difference!