A new TOTAL hydrogen filling station on Karlsruhe’s Südtangente ring-road was commissioned on Wednesday. The German Federal Ministry of Transport and Digital Infrastructure approved grants of approx. €970,000 (US$1.2 million) for the hydrogen facility under its National Innovation Program for Hydrogen and Fuel Cell Technology (NIP).

This H2 filling station—the eleventh in the TOTAL network and the tenth in the German federal state of Baden-Württemberg—is differentiated by producing hydrogen on-site through steam electrolysis, using electricity generated by a solar array. 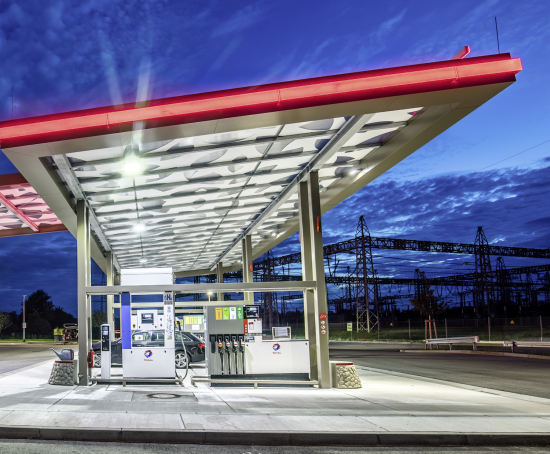 This hydrogen filling station marks the first time that a steam electrolysis plant in flexible operation is used for the production of hydrogen. It is funded by the state of Baden-Württemberg’s BWPLUS program and administered by the European Institute for Energy Research (EIFER).

Steam electrolyzers (earlier post) are excellent for converting electrical energy into chemical energy. Due to their high operating temperatures of up to 850 °C and the possibility of supplying the required energy in the form of heat, significantly higher electrical efficiencies can be achieved than with low-temperature electrolyzers.

This project allows EIFER to research steam electrolysis technology, which has been tested and evaluated at the cell and stack level in our laboratories for several years now, at the systems level as part of its industrial application.

The scientific monitoring of the hydrogen filling station will involve testing the electrolyzer’s load-sequence operating capability of more than 5,000 hours. Using a monitoring system, all of the facility’s system parameters will be recorded, and then evaluated and analysed by EIFER.

The electrolysis system is supplied by Dresden company Sunfire. In June 2017, Sunfire delivered the world’s most efficient steam electrolysis module (SOEC) in the context of the Horizon 2020 project ‘Green Industrial Hydrogen via reversible high-temperature electrolysis’ (GrInHy) at Salzgitter Flachstahl GmbH. With an input power of 150 kWel the module produces 40 Nm³ per hour of hydrogen. It can also be reversed into fuel cell mode with an output power of 30 kWel.

A particular feature of Sunfire technology is the high electrical efficiency of more than 80% with reference to the lower calorific value of hydrogen as it is not liquid water but gaseous water – i.e. steam – which undergoes the splitting process. The steam required is provided in the form of waste heat from the processes of the smelting plant at Salzgitter Flachstahl GmbH and supplied to the steam electrolysis unit. This is housed in a 20-foot container on the production site. After purification, the crude hydrogen is fed directly into the local H2 pipeline and recycled. The delivery from Dresden to Salzgitter took place in June 2017. Two smaller modules were put into operation at Boeing back in 2015.

Sunfire is working to bring renewable energies into the mobility sector in an efficient way.

This can happen directly as hydrogen at the filling station, or by supplying green hydrogen, synthesis gas or synthetic crude oil substitute (e-Crude) to refineries for the production of traditional fuels for combustion engines based on water, green electricity and CO2. The hydrogen filling station in Karlsruhe provides outstanding proof that Sunfire’s electrolysis technology is very versatile.

Proponents of fuel-cell vehicles, which use hydrogen to generate the electricity that drives their electric motor, argue that the technology is an important component for future electromobility. Fuel cell vehicles offer long ranges exceeding 400 km (249 miles) and refueling times of less than five minutes. Daimler will soon be unveiling its latest generation of fuel cell vehicles based on the Mercedes-Benz GLC. (Earlier post.)

Through the Clean Energy Partnership (CEP), the public and private sectors are jointly building a network of filling stations in Germany. Daimler is the investor behind the facility in Karlsruhe; the refueling technology comes from Linde. The station will be operated by H2 MOBILITY, a new joint venture formed by the industry partners Daimler, Air Liquide, Linde, Shell, OMV and TOTAL in order to expand the nationwide hydrogen network to as many as 400 stations by 2023. (Earlier post.)

H2 MOBILITY is planning to commission further hydrogen filling stations in the months ahead and recently issued a call for proposals for additional filling-station locations: several stations are to be built in regions with the largest potential hydrogen sales for fuel-cell cars (700 bar).

H2 MOBILITY has been tasked with building and operating a hydrogen infrastructure across Germany. This is unique: nowhere in the world is there a comparable business initiative that solves the chicken-and-egg problem so sustainably. By the end of 2018, 100 hydrogen stations will ensure a basic supply. If the introduction of hydrogen as a fuel is successful and the number of fuel-cell cars continues to grow, we will expand the network to as many as 400 hydrogen stations by 2023.

A hand to Germany, California, Japan, So-Korea and others to lead the way to H2 economy.

I originally read "40 Nm3" as 40 cubic nanometers and was thinking what's the point?

Nm3 is a common unit used in industry to refer to gas emissions or exchange. It stands for Normal cubic meter. Normal, in this case, refers to the gas at 0 degrees Celsius. To convert Nm3 to a cubic foot of gas (under standard conditions), multiply by 38.04.

If Germany does get to 400 stations in 2023 that would represent about a 12 fold increase. If the world installed base of FCEVs also increased 12x then that would bring it to something under 45K vehicles by 2023.

What makes more sense would be to increase the battery size to give the vehicle a 30-50 mile range and add a plug. By doing so the FC becomes a range extender and the output can be dropped in half which I would presume would significantly reduce the cost and size of the FC and probably actually lower the cost of the vehicle at the same time as increasing their production capacity.

An additional benefit would be that your H2 network could then service a fleet of vehicles that is 10 times as large. Users would also have the benefit of a drastically reduced fuel bill as well as only having to refuel every 2-3 months.

That IS the idea, lots of batteries, a plug and a fuel cell range extender. This has been promoted here for years.

Free fresh water and near future very low cost REs, specially outside peak periods, will help to reduce cost of clean H2, close and even under current cost of bio-fossil fuels in many countries.

For people with access to home charging facilities, combo-hybrid vehicle with batteries + FC could be one of best interim solution. Savings from smaller battery pack could offset some of the extra cost for the small fuel cell and H2 tanks.

Put CO2, water and electricity in an SOEC you get CO H2 synthesis gas out to make any hydrocarbon fuel you want.

Very impressive technology demonstration, and kudos to the engineers and developers (and sponsors) because this approach does point in the right direction of solving some of the basic, intractable problems with hydrogen; the cost of distribution.

But sadly, the volume of this system would not keep very many FCVs in the road for long.