New analysis based on big data analysis by Lux Research suggests that innovation interest in renewables is declining, after peaking about four years ago. Without continued innovation momentum, the market research firm noted, long-term success driven by further clean energy technology improvements is thrown into question.

The Lux Tech Signal works by algorithmically doing high-throughput parallel analysis of various large and complex datasets about innovation, resulting in a revealing picture about any technology’s progress. Lux says that the method has proven successful in uncovering predictive data about emerging innovation such as artificial intelligence, health sensors, and other digital transformation topics, as well as tracking declining innovation like diesel engines and the rise of tight oil, electric vehicles, and quinoa, to give just a few examples. 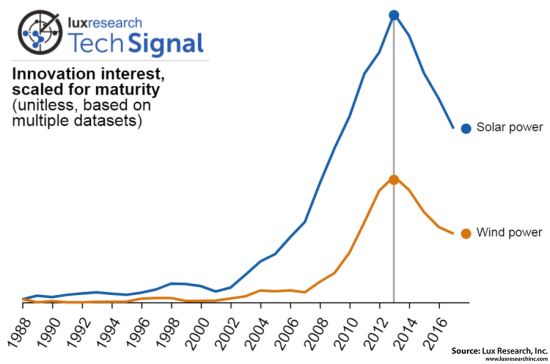 Focusing on energy storage shifts the peak date slightly, but the direction of the trend is the same. 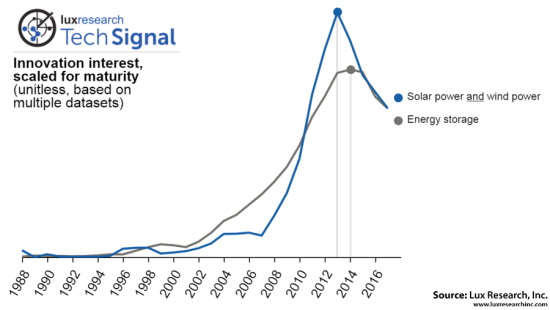 If, on the whole, we see a downward trend, then what does it mean that innovation interest is declining in clean energy – is that bad? There are two main schools of thought. The first interpretation is that the hard work has already been done in terms of technology development, and that solar, wind, and other renewables have reached a good enough status to eventually become the world’s main power sources. According to this theory, what remains are incremental improvements, business model work, and scale-up investment. If that is the case, then companies that are actively innovating in renewable energy breakthroughs need to pull back, because they are trying to solve a problem that has already been addressed. That is one interpretation of the data’s peak above, but we caution that it is a dangerous and complacent one: Given the extremely high costs of solar plus storage systems today, to take one example, it seems unlikely that incremental improvements will be sufficient.

The second interpretation is that the world has an alarming innovation gap when it comes to renewables: We are experiencing a lull in creativity and commitment, but still need further breakthroughs to enable a true transition to a future grid that is largely driven by renewables. In this school of thought, the data above points to an opportunity for risk-taking, visionary companies to push through to the next level of renewable energy technology, with all of the potential benefits in terms of cost-savings, resiliency, and other advantages.