Audi is showcasing its autonomous driving strategy at the IAA 2017 with the production Audi A8 (conditional automated driving at level 3 as standard) and two concept cars will also be demonstrating the Audi vision for level 4 and level 5. (Earlier post.)

The four-door Level 5 design vision Audi Aicon presents an autonomous Audi of the future with no steering wheel or pedals. The Aicon is designed for purely electric operation and should be able to cover distances between 700 and 800 kilometers (435.0 - 497.1 mi) on a single charge. 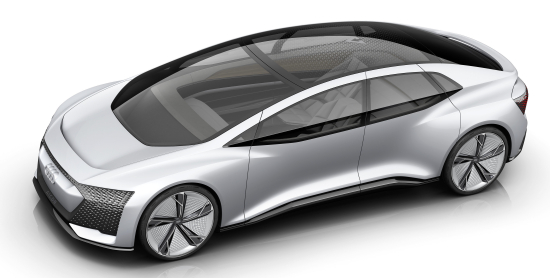 A highly efficient electric drive provides for the dynamics of the Audi Aicon. Four electric motors are located in the area of the front and rear axles. The energy storage units—solid-state batteries with considerably more energy capacity than lithium-ion batteries—are integrated into the area below the floor.

This operating strategy is also pursued by the powertrain and electric brake units, which use recuperation to recover energy. Targeted lightweight construction of the multimaterial body and optimized aerodynamics also help the Audi Aicon to achieve ranges between 700 and 800 kilometers (435.0 - 497.1 mi) on a single charge.

With a high-voltage system with 800 volts, the Aicon’s battery unit can be charged to 80 percent of capacity in less than 30 minutes. The car is also equipped with a unit of inductive, i.e. wireless, charging. The Aicon manages both without a driver. In an AI Zone, it can pull up to a charging station on its own and charge its battery without any human assistance.

As a true quattro, the Audi Aicon offers ample performance and even autonomously always reaches its destination safely regardless of the weather or road surface. The suspension is designed for maximum comfort. Pneumatic spring and damper units smooth out any road surface irregularities. And electric actuators at all four wheels actively counteract any body lean, whether when cornering, accelerating or braking. As a fully active suspension system, it also optimizes the qualities of the adaptive air suspension. The Audi Aicon literally glides over even large potholes.

The Aicon brakes primarily by way of recuperation and in so doing recharges the batteries.

The development engineers have relocated the disk brakes from the wheels to a position close to the drivetrain. This improves the aerodynamics at the wheels as there is no longer any need for air cooling at the wheels, which is always associated with turbulence. Another secondary effect is the reduction of the unsprung masses, which the Aicon’s passengers perceive as a particularly sensitive damping response to road surface irregularities.

The axle and drive units in the Audi Aicon are symmetrical, i.e. identical at the front and rear. Mechanical components, such as the steering shaft or steering hydraulics, have been eliminated. The car is therefore equipped with a complete all-wheel steering system without compromising the available space and thus the passenger compartment.

A positive effect for the practical qualities of the Audi Aicon: Despite its long wheelbase of nearly 3.47 meters (11.4 ft), the car is extremely agile due to its two steerable axles – the turning radius of only 8.50 meters (27.9 ft) is below that of a small car thus making the Audi Aicon suitable for city center driving.

The central element of the exterior is the cabin. Large glass surfaces at the front and rear as well as the significantly convex side windows create a bright expanse of space for the travelers. A distinct edge runs as a hard line along the side window surfaces of the Aicon back to the D-pillar—a first in automotive design. This line emphasizes the car’s length and effectively reduces the apparent volume of the cabin relative to the overall body. The darkened side sills rise subtly toward the rear, making it seem like the car is ducking.

The strongly flared wheel wells emphasize Audi’s quattro DNA while simultaneously building a bridge to the latest production creations from the Audi designers. Giant 26-inch wheels are placed as far outward as possible.

The designers reduced the front and rear ends to a minimum of lines and focused on large, uninterrupted surfaces. As with the Audi e-tron Sportback concept, the Aicon front features the inverted hexagonal Singleframe, a typical feature of the upcoming generation of electric cars from Audi.

Serious competition for future TESLA S-150 and beyond?

They were going to have an R8e, that never happened.

Lower cost improved SS batteries will be mass produced in automated factories in many EU countries.

Both extended range e-vehicles and SS batteries will quickly move to Asian countries and America by 2025 or shortly thereafter.

TESLA will have to adapt to survive.