Honda Motor Co. President and CEO, Takahiro Hachigo unveiled Honda’s new electric vehicle, the Urban EV Concept, at the Frankfurt Motor Show. The Urban EV Concept is built on a completely new platform, and sets the direction for the technology and design that will appear on a future battery electric Honda production model. The production version of the car will go onsale in Europe in 2019, he added. 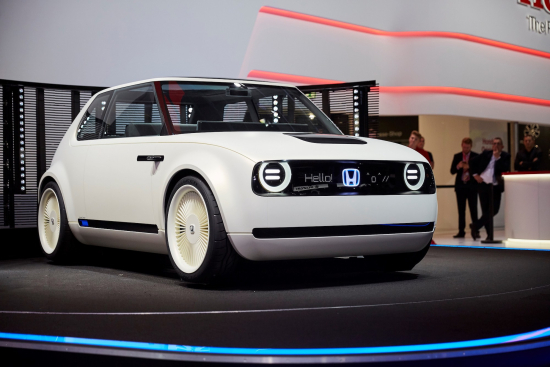 Honda’s Urban EV Concept showcases advanced technology within a simple and sophisticated design. Its low and wide proportions give the car a planted, muscular stance that hint at sporty driving performance. Its compact proportions mean it has a total vehicle length 100mm shorter than the Jazz supermini.

The driver’s outward visibility from the Urban EV Concept is excellent thanks to slim A-pillars and a wide windscreen that appears to sweep around the entire front of the car. Entry and exit from the vehicle is via rear-hinged coach doors. The electric charging cable connection is housed on the hood.

Honda’s Urban EV Concept can accommodate four occupants, across two bench seats finished in different materials. To create a lounge feeling, the front row is upholstered with natural grey fabric, with the seat backs, squabs and arm rests embellished with contemporary wood finish accents. The seatbelts for the rear bench are fixed in the middle of the seat, allowing the belt to retract out of the way before a passenger exits the car.

Honda’s Urban EV Concept also showcases the company’s vision for a world where mobility and daily life are seamlessly linked. The on-board advanced Honda Automated Network Assistant acts as a personal concierge, which learns from the driver by detecting emotions behind their judgments. It can then apply what it has learned from the driver’s past decisions to make new choices and recommendations.

Honda also unveiled the Power Manager Concept. The system is designed to incorporate electric vehicles into a smart power grid. It enables the collection and distribution of electricity between the grid, homes and businesses and electric vehicles, to intelligently balance demand and efficient storage of energy. Honda will apply its Power Manager technology as part of a smart grid pilot scheme—the SMILE project (Smart Ideas to Link Energies)—in the west of France.

We will incorporate electrified drivelines in two thirds of cars sold in the region by 2025. The introduction of our Power Manager system supports and reinforces our commitment. It uses advanced technology to intelligently integrate the electric vehicle into the wider power network, so it is no longer just a consumer but also a contributor to the grid. It underlines our pledge to develop a more sustainable mobility model.

Power Manager Concept works by aggregating and distributing energy to and from the grid, solar panel-equipped homes or workplaces, and electric vehicles.

Electricity is received into the system from the grid or is generated by the solar panels and can be used to power and heat the building as well as to charge the EV. While the EV is plugged in, the energy can be stored and used at home or sold back to the grid, potentially generating value for EV owners.

The Power Manager Concept system can help to stabilize the grid at times of either short or surplus supply, as well as representing a revenue opportunity for EV owners.