At the traditional Volkswagen Group Night event on the evening before the International Motor Show (IAA) opens in Frankfurt, the Volkswagen brand staged the world premiere of the newest I.D. CROZZ electric concept vehicle. The I.D. CROZZ is part of the electric campaign in which Volkswagen will be expanding its electric car model range—initially with three models from 2020. In 2025 the Volkswagen Brand will be offering 23 all-electric models. (Earlier post.) This model, which launches in 2020, is not only an important pillar of Volkswagen’s electric mobility campaign, but is also part of Volkswagen’s current SUV campaign.

The first version of the zero emission I.D. CROZZ was presented in Shanghai in April 2017. (Earlier post.) This concept vehicle has now been systematically further developed and refined in the direction of a production car as the I.D. CROZZ II. The basic concept of a crossover that combines an SUV with a four-door coupé has been further sharpened in this design. In addition, the I.D. CROZZ II has new features such as interactive voice control that can be used to open or close all doors and to activate or deactivate the fully automated I.D. Pilot mode.

Equipped with an electric 4MOTION all-wheel drive system, the I.D. CROZZ has one electric motor at the front axle and one at the rear; torque distribution is controlled via an electric propshaft. With an 83 kWh battery pack, the driving range of the SUV that outputs 225 kW (system power) and top speed of 180 km/h (112 mph) is up to 500 kilometers (311 miles) (NEDC) on one battery charge. The high-performance battery can be charged to 80% of its energy capacity in 30 minutes using a fast-charging system.

In most driving situations, the rear axle provides forward propulsion. As soon as vehicle dynamics make it necessary, an electric propshaft redistributes the power of the 4MOTION all-wheel drive between the front and rear axles in fractions of a second. In addition, the I.D. CROZZ can be constantly driven in an all-wheel drive mode, on off-road trails or snow, for instance. At the rear axle, the work is done by a compact 150 kW motor, while at the front there is a 75 kW coaxial drive.

An ideal distribution of weight between the two axles has been achieved by integrating the battery centrally within the I.D. CROZZ II and locating the two drive system units at the front and rear. The ratio is 48% (front) to 52% (rear). This gives the I.D. CROZZ II handling properties on the same level as a Golf GTI.

A significant role in this is also played by the running gear with its electronic damping control and newly designed multi-link rear suspension and likewise newly developed MacPherson front suspension—each equipped with an integrated drive system and a decoupled subframe. With this configuration, the running gear facilitates an extraordinarily large spread between great handling and top levels of suspension and acoustic comfort. The layout of the front axle and the front end package also result in a very small turning circle of 10.5 meters. 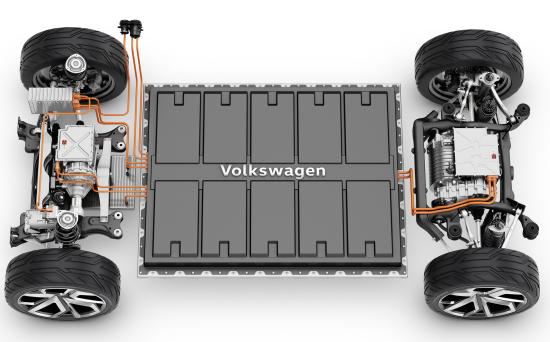 Always ensuring a supply of clean air in the interior, regardless of ambient conditions, is the CleanAir system that has been newly developed by Volkswagen. The menu provides information on the quality of the air in the car and on the system's current activity. In addition, the updated I.D. CROZZ is equipped with a new voice assistant, which enables opening and closing of the doors via voice command. It is also possible to activate or deactivate the fully automated driving mode I.D. Pilot by voice instruction.

Interaction via voice control. The I.D. CROZZ II has extended voice control. Natural voice commands can be used to perform such actions as open or close all doors and to activate or deactivate the fully automated I.D. Pilot mode. Voice control is activated by the wake-up command “Hello I.D.” combined with a command.

In the I.D. Pilot mode, the I.D. CROZZ II activates various laser scanners—four of them extend from the roof. When this happens, the cleanly styled roof sensors call attention to the fully autonomous mode by indirect lighting. The I.D. CROZZ II is not only able to detect other road users and its surroundings via the laser sensors; it is also assisted by ultrasonic sensors, radar sensors, side area view cameras and a front camera.

Smart Lights. Also new aboard the I.D. CROZZ are five Smart Lights. These intelligent light strips are located on the sides in the door control modules (door panels) and directly in front of the driver. These are interactive, slender LED elements. The Smart Lights in the door panels become active as soon as the driver or one of the passengers starts voice control to open or close one of the doors—a visually supportive element that shows the activation of voice control and the function that is being started with it.

I.D. family. The future generation of the I.D. family will extend the Volkswagen model range. In 2020, Volkswagen will launch the compact, all-electric, four-door I.D. in the Golf segment, while launching the modern I.D. CROZZ in the SUV segment. In addition, the I.D. BUZZ—a re-interpretation of the legendary Volkswagen Bulli—will enter the market in 2022.

All three I.D. concept cars share the new all-electric architecture that was developed as a common platform and a completely new and avant-garde design. Other characteristics are zero-emission driving ranges up to 600 kilometers (373 miles), a large amount of space, compact exterior dimensions and digitalization of all displays and controls. In addition, the new and innovative vw.OS operating system, which enables fast software updates and upgrades, will support each member of the I.D. family in a way similar to the usual updating methods for smartphones.

Another near future extended range competitor for TESLA, GM, Ford, BMW, Mercedes and many others?