Mitsubishi Fuso Truck and Bus Corporation (MFTBC), part of Daimler Trucks, celebrated the global launch of the FUSO eCanter (earlier post) in New York City. The FUSO eCanter is the world’s first series-produced all-electric light-duty truck and will be delivered to customers starting this year in the US, Europe and Japan. MFTBC is planning to deliver 500 units of this generation to customers within the next two years. Larger scale production is intended to start in 2019. 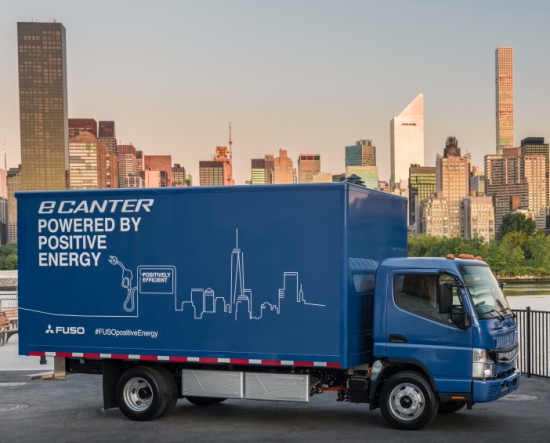 The all-electric light-duty truck is cost-efficient and economical for users, as already proved within customer tests in Europe. The FUSO eCanter has a range of 100 kilometers and a load capacity up to three and a half tons—depending on body and usage. The vehicle’s electric powertrain contains six high voltage lithium-ion battery packs with 420 V and 13.8 kWh each. The battery packs are being delivered from the 100% Daimler subsidiary Accumotive in Kamenz, Germany.

At the 2010 IAA Commercial Vehicle Show in Hannover, Germany, FUSO presented a first prototype of an electrically powered Canter E-Cell, leading into a pre-series production for testing purposes in 2014. The FUSO eCanter benefits from extensive experience of customer trials conducted in Portugal and Germany with the pre-series vehicles between 2014 and 2017.

In May of 2017, MFTBC announced its first commercial customer for the new in-line series production vehicle in the Japanese market. Seven-Eleven Co., Ltd. will be operating 25 units of the eCanter in their fleet.

After years of research and intensive customer testing, the FUSO eCanter will be fully integrated in the production line for the conventional combustion Fuso Canter truck. This past July, MFTBC celebrated the start of production of eCanter in Tramagal, Portugal. The production plant will assemble all eCanter vehicles for the European and U.S. markets. The Portuguese government has been continuously supporting the development of the eCanter since the early stages in 2010 until today, and for the future to come.