Enerkem Inc. has started the commercial production of cellulosic ethanol. Enerkem’s facility in Edmonton, AB, Canada, is the first commercial-scale plant in the world to produce cellulosic ethanol made from non-recyclable, non-compostable mixed municipal solid waste.

The company has been producing and selling biomethanol since 2016, prior to expanding production to include cellulosic ethanol with the installation of its methanol-to-ethanol conversion unit earlier this year.

This growing global market is expected to reach 124 billion liters (32.8 billion gallons) per year by 2030 according to the International Renewable Energy Agency. Enerkem will progressively increase production in Edmonton, while preparing to build the next Enerkem facilities locally and around the world, said Vincent Chornet, President and Chief Executive Officer of Enerkem.

Enerkem’s technology is deployed through an exclusive process that converts non-recyclable waste into a pure synthesis gas (or syngas). This syngas is then converted into biofuels and other widely used chemicals using catalysts. 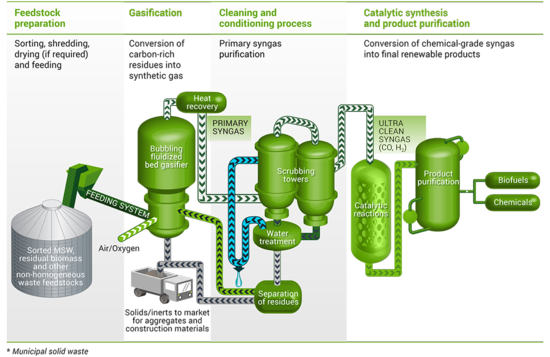 Enerkem’s technology not only provides a clean transportation fuel, it also disrupts the traditional waste landfilling and incineration models by offering a smart alternative to communities wanting to recover waste while sustainably fueling vehicles.

Converting harmful garbage into usable aggregates, construction materials, biofuels (biomethanol and ethanol) and chemicals is something that all small and large cities should do.

It could be even more useful if/when H2 production is added to the process for future FCEVs.

Synthesis gas is hydrogen and carbon monoxide. They don't bother with H2 because it's greenwashing PR.

Gasification has been able to turn biomass into hydrocarbons for many decades, we did not because oil was cheap..not any more.