Hong-Kong-based Sinotruk has made an initial purchase of UQM PowerPhase DT (drivetrain) systems (earlier post) for implementation and evaluation in their commercial vehicles. This is the first step towards the long term strategy of utilizing UQM electric drive products across Sinotruk’s portfolio of commercial vehicles. 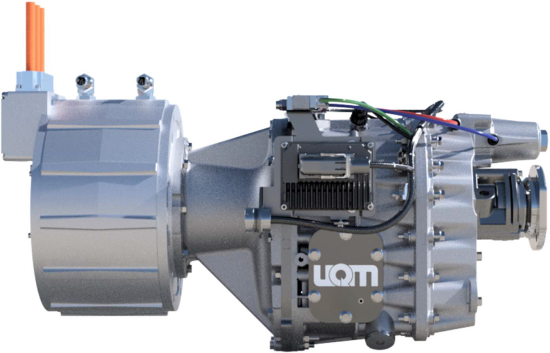 All combined, this is a bolt-on, fully electric drivetrain system. This turnkey approach allows customers in the medium- and heavy-duty EV commercial markets to achieve increased performance in areas of gradability, acceleration and efficiency.

Sinotruk is a leading heavy-duty commercial vehicle manufacturer in China and one of the largest commercial vehicle groups in the world, and this order signals the beginning of the commercial partnership with UQM. China National Heavy Duty Truck Group Co., Ltd. (CNHTC) is the parent company of Sinotruk. UQM recently announced the execution of a Definitive Stock Purchase Agreement with China Heavy Duty Truck Group, under which CNHTC will acquire 34% of UQM’s issued and outstanding common stock on a fully diluted basis.

After finding the right strategic partner in Sinotruk to enter the China market and expand globally, this is the first step in our business relationship. This initial order signals the beginning of UQM’s now increased access to the largest electric vehicle market in the world, leading to a much stronger competitive position for propulsion systems in the global electric vehicle market.

Since its founding in 1950, CNHTC has had a history of cooperation with international partners in developing new products and markets in China and elsewhere, including Steyr of Austria, MAN SE of Germany, and Cargotec of Finland. CNHTC has two subsidiaries listed on the Shenzhen Stock Exchange and the Hong Kong Stock Exchange, respectively.