Home About Contact RSS GCC Twitter Newsletter
Mercedes-Benz to set up EV production in US, battery plant; $1B investment in Alabama
Report: Japan to ease regulations on H2 fueling stations to cut setup and operating costs in half

Studies have shown that air pollution can have negative effects on cardiovascular health and life expectancy. Now new research indicates that it is also harmful to the kidneys. The study, which appears in an open access paper in the Journal of the American Society of Nephrology (JASN), shows that the effects on the kidneys are seen at low levels of particulate matter and increase linearly with rising levels of pollution.

Information on the relationship between air pollution and kidney disease is very scarce. To investigate, a team led by Ziyad Al-Aly, MD (Director of Clinical Epidemiology at the VA Saint Louis Health Care System) linked the Environmental Protection Agency (EPA) and the Department of Veterans Affairs databases to examine information on 2,482,737 US veterans who were followed for a median of 8.5 years. Air pollution levels were also assessed using space-borne sensors from NASA satellites. 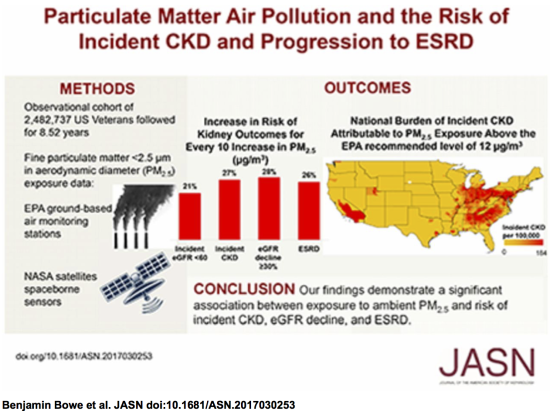 The researchers found a linear relationship between air pollution levels and risk of experiencing kidney function decline and of developing kidney disease or kidney failure.

Fine particles can damage the kidneys in the same way they damage other organs such as the heart and lungs. Airborne and invisible, microscopic pieces of dust, dirt, smoke, soot and liquid droplets often become destructive when they invade the bloodstream. The kidneys filter the blood, and these harmful particles can disrupt normal kidney function.

The results suggest that each year in the United States, 44,793 new cases of CKD and 2438 new cases of kidney failure are attributed to particulate matter air pollution exceeding the EPA’s recommended limit of 12 μg/m3.

Even levels below the limit set by the EPA were harmful to the kidneys. This suggests that there is no safe level of air pollution.

Dr. Al-Aly noted that the burden is not evenly distributed geographically: the highest toll seems to be in southern California and in large swaths of the Midwest, the Northeast, and the South. The findings have implications outside the United States and may help explain the substantial variation in the burden of kidney disease observed around the world.

What other damages are we creating with our CPPs, NGPPs, wood burning fire places, 1,75B+ ICEVs?

We may discover that benzene from petrochemicals has increased the cancer rates over time.