Home About Contact RSS GCC Twitter Newsletter
JingChi raises $52M in Pre-A round to fuel growth and development of autonomous fleets for US and China; Qiming Venture, NVIDIA invest
BMW integrating Amazon Alexa into all BMW and MINI vehicles from mid-2018

In Formula E, the teams and manufacturers are allowed to develop the powertrain consisting of the motor, transmission, parts of the suspension and the respective software. The combination of the motor and transmission is the centerpiece of the Audi e-tron FE04. The engineers primarily focused on designing the motor-generator unit (MGU) for greater efficiency. To transmit the power to the wheels, Team Audi Sport ABT Schaeffler will be using a high-efficiency transmission with only one gear in the 2017/2018 season. 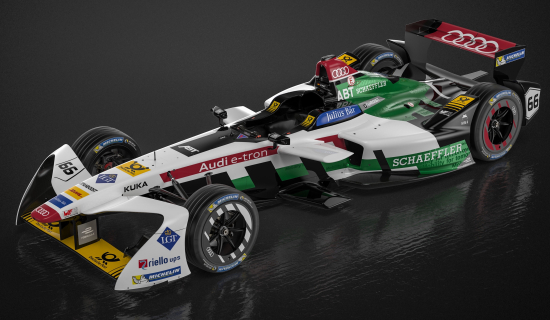 Together with our technology partner Schaeffler, we have developed a completely new powertrain. You can immediately tell this by looking at the new carbon housing of the powertrain. The car also sounds different because we’re pursuing new avenues in technology.

Audi is the first German automobile manufacturer to race in Formula E. The brand is taking ABT Sportsline’s slot on the FE grid in the 2017/2018 season. The Allgäu-based team has been successfully present in Formula E ever since the inception of the electric racing series and in the future will be taking care of the e-tron race cars as the fielding team. Competing for Audi will be Daniel Abt (Germany) and title defender Lucas di Grassi (Brazil).

While in the first Formula E season in 2014/2015 completely identical electric race cars were used, the teams and manufacturers, since the 2015/2016 season, have been allowed to develop the entire powertrain themselves, consisting of the motor, transmission and parts of the suspension as well as the respective software.

Similar as in the DTM, technical changes following the homologation of the race cars, which is performed once a year is no longer permitted. During the season, the engineers and drivers primarily endeavor to extract the optimum from the existing package and to perfectly adapt the car to the respective city street circuit. The software which in Formula E makes all the difference particularly in terms of energy management offers the greatest scope in this respect.

Power to the Audi e-tron FE04 is supplied by a battery weighing 200 kilograms (441 lbs) developed by Williams Advanced Engineering and that is identical for all cars. The lithium-ion battery has a capacity of 34 kWh of which 28 kWh may be used. It sits between the driver’s seat and the powertrain.

Unique to Formula E are the profiled all-weather specification tires from Audi’s long-term partner Michelin which have a close reference to the production versions.

To transmit the power to the wheels, Audi Sport ABT Schaeffler in the new season is using a high-efficiency transmission with one instead of the previous three gears. A central display provides all the key information on the condition of the MGU, the system temperatures, which are particularly important with an electrically operated race car, and the current charge state of the battery.

Like in Formula 1, the driver sits in a carbon fiber monocoque complying with the latest FIA safety standards. Two roll bars and CFRP crash structures at the front, rear and sides provide maximum safety. The minimum weight of a Formula E race car is 880 kilograms (1,940 lbs—including the driver. The electric race car accelerates from 0 to 100 km/h in 3.5 seconds. Top speed on the city street circuits is about 225 km/h (140 mph).

The Audi e-tron FE04 is the final evolution of the first Formula E era. In the fifth season that will start in fall/winter of 2018, a completely new design of a specification chassis will be used that will radically differ from all single-seater cars known to date. The battery to be used then will have twice the capacity of the current one so that the car change currently required will no longer be necessary and the drivers will contest the race in only one car.

After nearly 40 years of being successfully active in motorsport on the highest level, Audi now becomes the first German automobile manufacturer to compete in Formula E in order to test and advance the development of new technologies for production. Following quattro, TFSI, TDI, hybrid drive and many other innovations, our first single-seater race car is a portent of our product offensive in the field of electric mobility that we are ringing in with the Audi e-tron in 2018.

—Peter Mertens, Member of the Board of Management, Technical Development, AUDI AG

At the IAA, Audi announced having more than 20 electrified models in its range even before 2025 including Plug-in-hybrids and fully electric cars.