The new Regal is the first Buick to offer the automaker’s standard active-hood pedestrian safety system, which senses the imminent impact of a pedestrian from 25-48 km/h and uses a pyrotechnic actuator to lift up the back of the hood by about 10 cm in milliseconds to lessen the impact and potentially reduce injury. 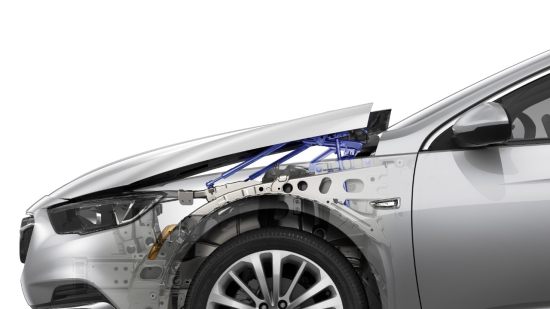 Since GM first introduced the active-hood system on a production vehicle in Europe 10 years ago, it has been made available on a number of GM vehicles in the US and Korea as well. The new Regal received maximum five-star safety ratings in both Europe and North America.

The active hood is expected to be particularly beneficial in countries such as China where there is a higher population density and more pedestrians. WHO estimates that vulnerable road users, such as pedestrians, cyclists and people on e-bikes and motorcycles, account for 60 percent of the approximately 260,000 people who die as a result of road accidents each year in China.

When the PD system identifies a pedestrian directly ahead and determines a collision is imminent, the system alerts the driver and, if necessary, automatically applies the brakes to help reduce the collision’s severity or avoid the collision, while prepping the active hood for deployment to further mitigate the severity of impact.

In addition, the new Regal’s automatic parking assist (APA) can take over steering and control the brakes and accelerator, setting free the driver’s hands and feet during parking.

GM helped develop the active-hood system in collaboration with a consortium of six other automakers and one automotive supplier known as the Global Human Body Models Consortium (GHBMC). The consortium’s mission is to develop and maintain high fidelity Finite Element human body models for automotive crash simulations in an effort to advance crash safety technology.

For the development and validation of the active hood, a variety of GHBMC computerized human body models of a typical six-year-old child, small adult female and average-size adult male were used to estimate factors such as head impact timing and hood deflection due to body loading. Crash simulation analysis helped determine optimal deployment of the active hood using a system of sensors, actuators, hinges and a sensing diagnostic module.

The GHBMC’s anatomically accurate human body models are built using data culled from MRI, CT and other medical scanning techniques. They offer a higher degree of biofidelity—in that they perform like bodies do in real life—compared to conventional crash test dummies.

The GHBMC now has a “family” of 13 body models of male, female, adult and child vehicle occupants and pedestrians in detailed and simplified versions for use in simulations. Human body models have applications beyond the automotive industry, including the military, sports and protective clothing.