Diesel’s market share in the EU-15 fell from 50.2% to 46.3% of new car registrations in the first half of 2017, according to the European Association of Automobile Manufacturers (ACEA). In absolute numbers, 152,323 fewer diesel cars were sold. This drop was offset by an increase in the sale of gasoline engined vehicles. Automakers are cautioning that this shift to gasoline engines—with their higher CO2 values—will pose additional challenges to meeting future CO2 reduction targets.

For the first time since 2009, gasoline vehicles have overtaken diesel to become the most sold car type in the EU-15. Gasoline vehicles now account for 48.5% of new passenger car sales, up from 45.8% a year ago—328,615 extra gasoline cars sold year-on-year. Electrically-chargeable vehicles accounted for 1.3% of total car sales (a market share which remains stable), hybrids for 2.6%, and cars powered by propane or natural gas for 1.3%. 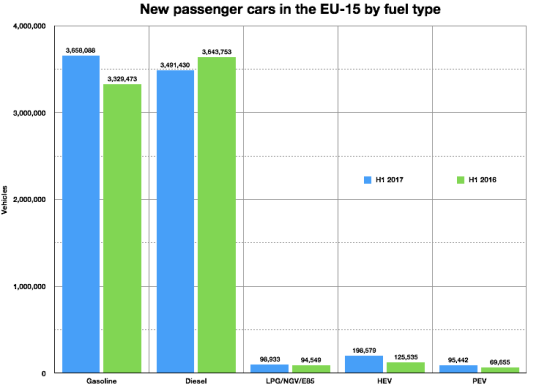 Alternative powertrains will undoubtedly play an increasing role in the transport mix, and all European manufacturers are investing heavily in them. To this end, more needs to be done to encourage consumers to buy alternatively-powered vehicles, for instance by putting in place the right incentives and deploying recharging infrastructure across the EU.

In the meantime, however, as diesel cars emit significantly less CO2 than equivalent petrol-powered vehicles, they will have to be part of the gradual transition to low-carbon vehicles, acting as a ‘bridge’ technology. Policy makers need to be aware that a sudden shift from diesel technology to petrol will lead to an increase in CO2 emissions, given that the market penetration of alternative powertrains remains low.”

Seeking to exploit the opportunity provided by the decline in diesel, in September, Dr. Johan Van Zyl, President and CEO of Toyota Motor Europe, announced today that in future it is Toyota’s ambition to provide its core models with a choice of two hybrid powertrains. One will provide the traditional benefits of efficiency and fuel economy, as in the current offer. The second will build on this and add more power and a more dynamic driving character. More details about these plans will be revealed early next year.

I think the fear of being banned from cities is starting to have an effect in Europe. You would hope that people would start to switch to hybrids (of whatever hue) ASAP.

What I find galling about the VW diesel scandal is that most of the damage was done to European car manufacturers and European city dwellers, while most of the cash has been extorted by the USA.
If they have to pay fines, it should be to the people damaged by the wrongdoing (or the medical services that have to look after them).

With so much invested in continued sales it is no wonder the industry are pushing back by advertising their topsy turvey world view that buying more deisel cars will help reduce the global (esp Europe's) C02footprint.

Australians per capita CO2 emissions are in the top two globally but that takes no account of exported fossil fuels mainly coal.
The convention is that as the emissions are allocated at the point of use so these exports are attributed 'elsewhere'

Here we see an industry based on CO2 emissions claiming that any reduction in diesel car production will increase C02 emissions.

Conveniently forgetting that by their own standards the B.E.V. produces NO - 0 C02!

Even hybrids,
which the same industry concedes have the greatest cost benefit for reduced C02 from passenger vehicles with
spark ignition gasoline engines and so produce very few diesel versions,
are conveniently dismissed in this industry biased report with "given that the market penetration of alternative powertrains remains low.”

The complicated internal combustion engine is obsolete, especially the diesel which is also more expensive because of the necessary extensive emissions system. Just like the petro fueled automobile obsoleted the horse and buggy, the battery electric car has obsoleted the petro car because of an exhaustive listing of compelling benefits. The sad part is how successful the oil companies and legacy car makers have been in continuing to build dirty gassers through buying off politicians and propagandizing lies.

The idea that diesels have a lower CO2 output than gasoline comes from their higher efficiency. But the numbers don't include the output of carbon black. In todays "clean diesels" CB is caught by particulate traps, and burnt off outside the engine. Question: what does carbon black become when it's burnt off? CO2 perhaps?

A big thankyou to VW diesels and the $30+B penalty?

Near future 3X to 5X lower cost batteries could put the final nail in ICEVs coffin?

@harvey,
A bit optimistic there, I feel.