Headlining the event was the European premiere of the new Nissan LEAF, with a special “2.ZERO” version for Europe. The new Nissan LEAF powertrain delivers 110kW of power output and 320 N·m of torque, improving acceleration and driver enjoyment; the EV has a range of 378k (235 miles) (NEDC) on a single charge and features ProPILOT advanced driver assistance system for a safer, more comfortable drive, and ProPILOT Park for fully autonomous parking. The car’s e-Pedal technology also lets motorists drive and brake seamlessly.

The Nissan LEAF 2.ZERO limited edition. This version is the first model in Europe to be fully equipped with Nissan’s ProPILOT technology for the most confident and comfortable driving experience.

Another new product announced at Nissan Futures was the new longer range e-NV200 electric van. With a 280km (174 miles) range (NEDC), Europe’s best selling electric van, can now travel 100km further than ever before on a single charge—a 60% range improvement. With no increase in size or weight of the battery itself, customers do not have to compromise in either load space or payload. 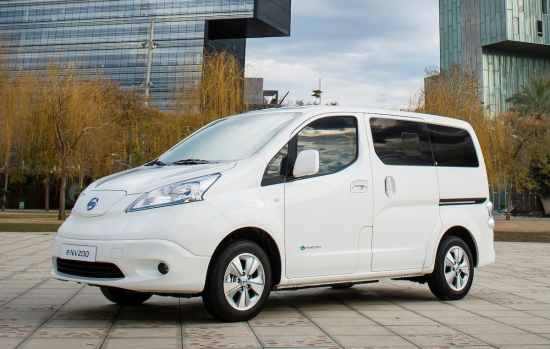 Infrastructure. Nissan will expand its existing outdoor charging network by 20% over the next 18 months. Working with EV fast charging standard CHAdeMO, the company has already built Europe’s most comprehensive charging network, with more than 4,600 quick chargers across the region. Nissan now plans to invest in supporting the installation of a further 1,000 chargers over the next 18 months. The company is working with its partners, business owners, municipalities and sector leaders across Europe to ensure the roll out plans are focused on providing maximum convenience to its drivers, with installations on highways, in towns, and throughout key European cities. The Nissan 22kW charger goes even faster, capable of charging your Nissan EV in just 2 hours. Designed for fleet and business owners, the fast charger can also be purchased by consumers who want an even quicker charging experience.

Nissan also showcased its new home energy storage system, which follows on from the success of xStorage. Created especially for EV owners, customers can plug their electric vehicle directly into the wall box to charge. It comes with its own built in energy storage system, giving customers the ability to better manage their energy costs and even generate their own electricity from solar panels, delivering 100% renewable and zero emission power for their car.

It follows the success of Nissan’s existing xStorage solution, which was developed in partnership with Eaton and has sold more than 1,000 units across Europe in just three months, with 5,000 units expected to be sold by the end of March 2018. Nissan expects to sell 100,000 home energy units by the end of FY2020 in Europe.

The new range of home and office charging units will be available from early 2018.

V2G. Over the past year in Denmark, Nissan has been testing a vehicle-to-grid option. Using Nissan bi-directional charging, customers can draw energy from the grid to power their car or van and then ‘sell’ excess back to the grid for others to use.

Nissan also announced a UK collaboration with OVO allowing customers to purchase an xStorage home energy unit at a discounted price enabling them to ‘sell’ back energy to the grid. This helps contribute to grid stability in a world where demand for energy is increasing due to a growing, urbanising population. It can result in an additional expected income for users averaging £350 / €400 per year.

Nissan is already exploring other regions in Europe to make V2G EVs a milestone for the future.

Step by step we are removing any barriers to electric vehicle adoption – from infrastructure investment, to how people access the power itself. Over the coming decades through our Nissan Intelligent Mobility vision, the electric ecosystem will transform modern life as we know it. But while the starting point for it is 100% electric vehicles like the new LEAF and e-NV200, the impact goes much further. With fewer emissions, our cities and air will be cleaner. With more intelligent safety features, car accidents would be reduced dramatically. With better connections between vehicles and their surroundings, the school run or daily commute will no longer be clogged with traffic. And by letting people charge their vehicle and their home from each other, we can use our time and energy supplies more efficiently than ever.

Darned if I would fancy paying thousands of Euros for second hand batteries, originally designed and already used in cars:
https://uk.eaton.com/content/gb/en/products/electrical/xStorage.html?wtredirect=www.eaton.com/xstorage

I find a range of 235 miles a bit hard to take with a 40 KwH battery - OK, it is the NEDC cycle, which is more or less la la land. I would have said more like 132 miles (assuming 3.3 miles / KwH).
Certainly, it is an improvement, and certainly, it will be more than enough for most people's daily usage, but 235 miles, I think not.

Dave, I think they should throw some goodwill our way, not only are they second hand, they are basically making money on something that they would have to pay to dispose of.

I am looking for some Li-Ion batteries such as those for some off grid RV/solar contraption that lives only in my brain, till I win the lottery or something, the only thing I've seen worth while price wise is the powerwall 2. Ideally I would like a 48v system like LGChem's Resu line, figure by the time I get all of this in motion, stuff will be cheap.

I want to slap monocrystalline panels nearly every place that I can (and that makes sense). Have a decent energy storage/sink, and be able to go a decent amount of time off grid- almost indefinitely if I could, to see if I could do it. My design is not perfect, I would need a diesel powered jet coolant-heater like truckers use to heat the cooling loop for their engines, I'd cycle radiant heating to keep the tanks and myself from freezing.

So they absolutely should reuse end of life (or near end of life) Li batteries and battery packs.

Whether they should be at individual house level or a somewhere in the grid, is another question, as is the price.

+ "Always look on the bright side of life".

@Dave
If you are offered a domestic storage unit with a given capacity and at 30% cost reduction - what is not to like?
(http://www.powervault.co.uk/article/powervault-and-renault-give-ev-batteries-a-second-life-in-smart-energy-deal/)
And as mahonj points out, some people abhor waste and actively seek out re-usable and recycled goods.