Deutsche Post DHL Group (DPDHL), the world’s largest mail and logistics company, and ZF, one of the world's largest automotive suppliers, have partnered together to deploy a test fleet of autonomous delivery trucks, starting in 2018.

DPDHL will outfit electric light trucks with the ZF ProAI self-driving system, based on NVIDIA DRIVE PX technology (currently the Drive PX 2 AI platform), for automating package transportation and delivery, including the “last mile” of deliveries. Taking packages from a central point to their final destinations is considered the most complex and costliest aspect of courier and e-commerce deliveries. 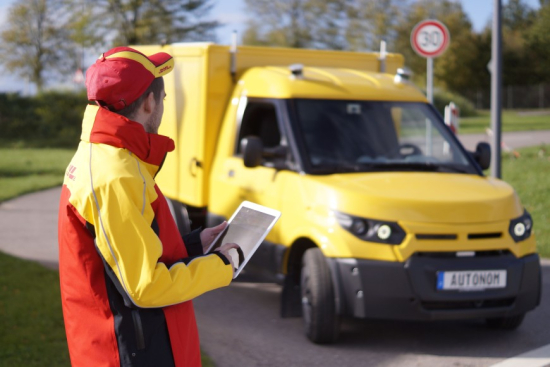 ZF is delivering ZF ProAI as an in-vehicle system capable of over-the-air updates to add new features and capabilities throughout the life of the vehicle. It is also configured for V2X applications, so it can communicate with other vehicles and with the surrounding infrastructure. In addition, the learning and networking capacity of ZF ProAI can help make an entire vehicle fleet safer and more efficient by means of “swarm intelligence.”

DPDHL currently has a fleet of 3,400 StreetScooter electric delivery vehicles (earlier post), which can be equipped with ZF’s multiple sensors, including cameras, LiDAR and radar, that feed into the ZF ProAI system. This can enable the vehicle to use AI to understand its environment, plan a safe path forward, proceed along a selected route and park itself— ensuring deliveries can be made with greater accuracy and safety, and at lower cost.

In its StreetScooter fleet, Deutsche Post DHL is taking its next step with our current and future generation of surround sensor technology and ZF ProAI artificial intelligence brain powered by NVIDIA. ZF ProAI is the brain between our autonomous driving sensor set to detect and understand the environment, and our motion control based on outstanding mechanical competence—the entire system follows our ‘see - think - act’ approach. In supply logistics and on the last mile where autonomous driving has tremendous benefits, goods can be delivered independent of the time of the day and delivery staff, with minimal noise and emissions, thus significantly reducing traffic congestion in city centers.

Demonstrations of the DPDHL delivery prototype are taking place at the GPU Technology Conference in Munich through 12 October.

StreetScooter ramps up. A subsidiary of Deutsche Post DHL Group, StreetScooter confirmed that its second manufacturing facility will be built in Düren and be capable of producing up to 10,000 e-vehicles per year. Operations at the 78,000 square meter facility, owned by the automotive supplier Neapco, will begin in the second quarter of 2018. With factories in both Aachen and Düren, StreetScooter will reach the production capacities announced this year of up to 20,000 e-vehicles per annum, with another expansion possible if the facility switches to two or even three shift operations.

In addition, Deutsche Post is now testing several hundred StreetScooter WORK L’s equipped for the first time with fuel cell drives. These vehicles could travel more than 500 kilometers (311 miles) and Deutsche Post DHL Group is planning test runs for the next two years.

This is part of the final answer?

UBER like mini (ADV) e-buses could move people from home to train/bus stations (and back) and greatly reduce traffic in city cores.