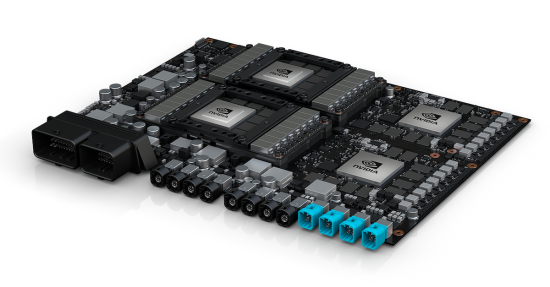 The computational requirements of fully autonomous vehicles (which NVIDIA refers to as robotaxis) are enormous— perceiving the world through high-resolution, 360-degree surround cameras and LiDARs; localizing the vehicle within centimeter accuracy; tracking vehicles and people around the car; and planning a safe and comfortable path to the destination. All this processing must be done with multiple levels of redundancy to ensure the highest level of safety. The computing demands of driverless vehicles are easily 50 to 100 times more intensive than the most advanced cars today, NVIDIA says.

Pegasus reduces the volumetric requirements from this:

Pegasus will be available to NVIDIA automotive partners in the second half of 2018. NVIDIA DriveWorks software and NVIDIA DRIVE PX 2 configurations are available today for developers working on autonomous vehicles and algorithms.

NVIDIA DRIVE PX Platform. The NVIDIA DRIVE PX platform scales from a single mobile processor configuration delivering Level 2+/Level 3 capabilities to a combination of multiple mobile processors and discrete GPUs for full Level 5. These configurations run on a single, open software architecture. This enables automakers and tier 1 suppliers to move from development into production for a wide range of self-driving solutions—from AutoCruise on the highway, to AutoChauffeur for point-to-point travel, to Pegasus for a fully autonomous vehicle.

This cloud-to-car approach enables cars to receive over-the-air updates to add new features and capabilities throughout the life of a vehicle.

Amazing speed with low energy consumption offers great potential for near future level 5 ADVs. Will sensors and software keep up?