At Busworld Europe in Belgium later this month, AKASOL will present its AKASYSTEM OEM battery system as a complete roof installation including the chiller and other additional components. From 2018, two well-known European bus manufacturers will use the technology in Germany, with plans to equip around 10,000 e-buses over the next few years. AKASOL is now expanding its production facilities in order to meet growing demand and further customer orders.

With its compact dimensions (150 x 700 x 1,700 mm) and modular design, AKASYSTEM OEM is especially suitable for use in commercial vehicles such as buses or trucks. AKASOL has succeeded in integrating standardized PHEV battery modules (plug-in hybrid electric vehicle) from major manufacturers which are also used in the passenger car segment. 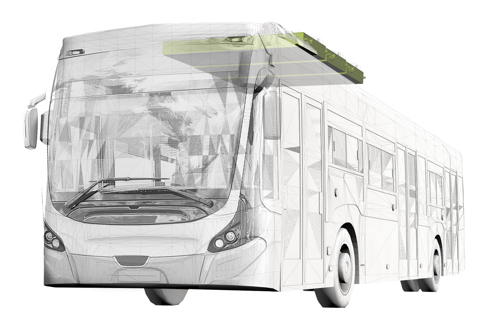 Developed in accordance with the ISO 26262 standard, AKASYSTEM OEM can be adapted to match specific customer requirements, making it fully scalable. With a novel, cost-effective water/glycol cooling system, it is efficient and durable. In day-to day use, for example in public transport, this results in optimal thermal environmental conditions. The lithium-ion battery system achieves more than 3,000 full cycles and can be fast-charged with up to 500 kW.

The standard version of AKASYSTEM OEM, based on NMC chemistry, has a storage capacity of 24.4 kWh at a voltage of 661 V (nominal) and achieves an output of 150 kW. Energy amount and power can be scaled up by connecting an unlimited number of AKASYSTEM OEM units in parallel. The system also complies with the highest safety standards in the automotive sector, such as the Automotive Safety Integrity Level ASIL-C, as well as all EUCAR, GB/T, UN 38.3, and ECE R100 safety and performance requirements.

In the first phase of expansion, the company will start large-scale production of battery systems for electric buses with a capacity of up to 300 MWh at a new facility in Langen. This means that between 1,000 (300 kWh) and 1,500 (200 kWh) electric buses can be equipped each year.

In the second step, the capacity is to be expanded to 600 MWh per year (2,000 to 3,000 buses). The automated, automotive-suitable serial production line, which is certified according to IATF 16949, will be commissioned in November.

Finally a major manufacturer will use a modular plug-in approach for variable/extendable battery pack. Going from one (1) module to 12+ modules could easily go from 25 to 300+ kWh and twice that with near future 2X to 3X batteries.

Variable architecture could temporarily and automatically split the total battery pack in 2 to 4+ packs for faster ultra quick charging.

Wonder why the batteries could not be mounted under the seats or floor to lower the center of gravity.