Among its numerous debuts at Busworld Europe in Belgium, Daimler Buses took the wraps off the new Citaro hybrid urban bus. The hybrid powertrain is optionally available for a large number of model variants of the best-selling urban bus, even for the natural-gas-engined Citaro NGT.

Together with the new electrohydraulic steering, the Citaro hybrid further reduces the fuel consumption of the Citaro by up to 8.5%. The hybrid drive takes up little space; the outer contours of the bus, like the passenger compartment, remain unchanged; the extra weight is low. 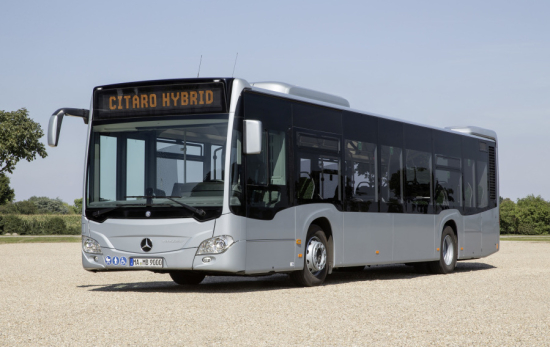 The electric motor on the Citaro hybrid assists the combustion engine when high levels of power are required, particularly when moving off. It does not serve to boost maximum power; the output and torque figures for the bus remain unchanged. Instead, the electric motor reduces the burden on the engine while also improving the vehicle’s start-off characteristics. This does not involve lowering the engine’s speed—the peak output is simply throttled imperceptibly with the electric motor making up the difference.

In addition to this, a slight boost effect from the electric motor at idling speed increases the combustion engine’s efficiency. These two functions together translate into a reduction in fuel consumption.

The hybrid system’s disc­shaped motor with integral power electronics is a permanently excited synchronous motor; it is fitted between the combustion engine and the automatic transmission. It generates a maximum output of 14 kW and 220 N·m of peak torque.

The electric power generated by recuperation is stored in a bank of supercapacitors. These electricity storage units are characterized by a high power density. They are resistant to high power peaks and have a long life. Unlike batteries, supercaps are ideally suited to the continuous quick changeover between charging and discharging that occurs when stopping and pulling away again in typical city bus operation. Braking to a stop from a speed of 50 km/h just once is enough to recharge the power storage units in the Citaro hybrid.

The power storage unit assembly in the Citaro hybrid is made up of two modules, with each module containing 16 supercaps. The two modules together have a total capacity of 2 Ah and are mounted in a space-saving location at the back of the roof. A perforated aluminium cover protects the modules from external influences and direct sunlight. At the same time, this also makes use of the airflow to provide the necessary cooling. 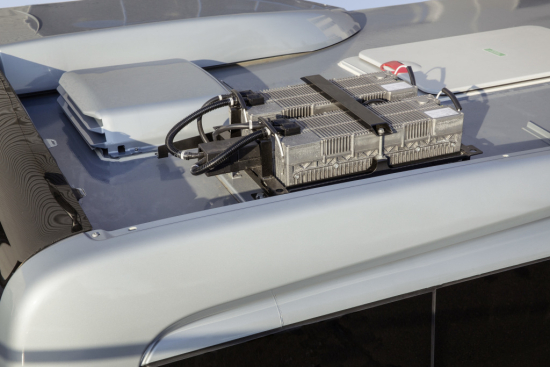 An inverter converts the stored direct current into alternating current in order to drive the electric motor. Both the inverter and the electric motor are water-cooled. The additional radiator for this low-temperature cooling at a maximum of 65 degrees Celsius is installed in a space-saving manner on the left side of the vehicle directly in front of the main radiator.

The city bus is the first commercial vehicle to come with a separate 48 volt network, similar to that found on hybrid passenger cars from Mercedes-Benz.

The hybrid drive adds just 156 kg (344 lbs) to the vehicle’s weight—a fraction of the weight of other electric drive systems. As a result, there is just a marginal reduction in total passenger capacity that is insignificant in practice: the standard-specification Citaro hybrid with diesel engine offers space for up to 105 passengers as a rigid bus with a permissible GVW of 18 t and 159 passengers as an articulated bus.

The development team for the Citaro hybrid have relied on proven components and made the most of the close links and wide-ranging experience within the Daimler Group. These components have been tried and tested, their comparatively high production numbers lower costs and they also make it easier to supply replacement parts.

Besides the Citaro hybrid, Intelligent Eco Steering can also be ordered as an option for the city bus family’s entire model range, including the CapaCity high-capacity bus.

The hybrid drive is available as optional equipment for all Citaro models in conjunction with the Mercedes-Benz OM 936 G in-line six-cylinder diesel engine in both vertical and horizontal versions. The wide Citaro hybrid model line-up therefore comprises the compact Citaro K, the Citaro rigid bus, the Citaro G articulated bus, as well as the low-entry Citaro LE in all variants.

The hybrid drive for the Citaro is completely compatible with the familiar automatic transmissions from ZF and Voith. The only models for which hybrid drive is not available are Citaro buses fitted with the Mercedes-Benz OM 470 diesel engine due to a lack of installation space, as well as the high-capacity buses in the CapaCity series for the same reason.

All components are designed to last for the duration of the vehicle’s service life, which is around twelve years for a city bus. The hybrid drive’s supporting function furthermore helps to conserve the combustion engine when driving at high loads. The use of the electric motor as a power generator has the additional effect of relieving the strain on the brakes, which can greatly extend the service life of both brake discs and pads.

Could be a good INTERIM solution for our big cities, with very cold snowy winter months, at least until such times as improved 3X to 4X (300+ kWh) lower cost batteries become avaialable.

The Proterra Catalyst E2 Series buses are available with 440, 550 or 660 Kwh batteries and should cost less to own than the diesel buses. They will probably work just fine in your cold snowy winter months. Park City, Utah is getting a number to try. We probably have more snow but may not be as cold.