At the Tokyo Motor Show, Mitsubishi Fuso Truck and Bus Corporation (MFTBC), part of Daimler Trucks, announced that it will electrify its complete range of trucks and buses in upcoming years. MFTBC also unveiled the E-FUSO brand, which will be exclusively dedicated to electric mobility of trucks and buses.

As further proof of this strategic move, MFTBC also unveiled an all-electric heavy-duty truck concept with a range of up to 350 kilometers (217 miles). The truck—named E-FUSO Vision One—marks the top end of the electrification path of the company’s portfolio in the upcoming years. This initiative will be backed by access to Daimler know-how in the fields of battery and charging technology. 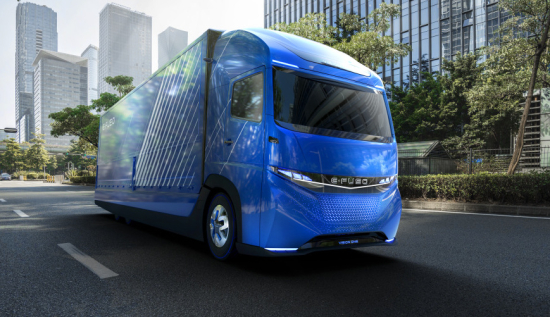 Our E-FUSO Vision One is an outlook on a feasible all-electric heavy-duty truck. It underlines our commitment to electrify our complete product range. FUSO has been a pioneer in the electrification of trucks for many years. Just one month ago we launched our eCanter, the first serial-produced, all-electric light duty truck. [Earlier post.] In the future, all our electrified vehicles will run under the name of E-FUSO, our new product brand dedicated exclusively to electric trucks and buses.

With the eCanter, we have proven electric trucks are feasible for commercialization. Today, our eCanter saves up to 1000 Euros in running costs per 10,000 km. And with the rapidly evolving battery technology, we will continue to develop electric trucks and buses that will have a positive environmental and economic impact on society.

The E-FUSO Vision One is an all-electric heavy-duty truck concept, has a Gross Vehicle Weight (GVW) of about 23 tons and carries a payload of approximately 11 tons—two tons less than its diesel counterpart. It can be fitted with battery packs with up to 300 kWh capacity, thus enabling a range of up to 350 km on a single charge.

While the electrification of long-haul trucks will still need considerable time, a potential application for the Vision One heavy-duty truck is regional intra-city distribution. Given the fact that growing customer interest, infrastructure development and regulatory efforts are likely to spur the electrification of road transport, a possible market entry for the series version of the E-FUSO Vision One could be feasible within four years in mature markets like Japan, Europe or the US, the company said.

E-FUSO. With the launch of the electric brand E-FUSO, FUSO underlines its commitment to electrify its complete range of products. The commitment goes beyond the development of the heavy-duty truck, which marks the top end of the electrification process. In upcoming years, all truck and bus models by FUSO will include an additional electric powertrain alternative. The timing for the launch of each model will be defined according to the required technology and feasibility.

FUSO’s eCanter handed over to Seven-Eleven, UPS and Yamato Transport. In addition to the E-FUSO Vision One, FUSO also showcased its eCanter, the first series-produced all-electric light-duty truck, which was recently launched in New York City. By developing the eCanter and through intensive customer testing, FUSO gained valuable experience with electric trucks, which will help to bring an electric heavy-duty model onto the streets within the next four years.

The eCanter with a GVW of 7.5 tons and a range of 100-120 km on a single charge not only help to lower greenhouse gas emissions and noise pollution in urban areas, but has also proven commercial benefits with savings up to 1,000 Euros in operating costs per 10,000 kilometers.

The first small series of the eCanter has been handed over to customers in Japan including the convenience-store giant Seven-Eleven, and Japan’s largest delivery-logistics provider Yamato. Customers in the United States include United Parcel Service (UPS), and several NGOs, including Habitat for Humanity, Wildlife Conservation Society, and The New York Botanical Garden.

In addition to its experience in the development of electric trucks, E-FUSO also benefits from having access to the technical resources of its parent company Daimler AG. Daimler heavily invests in electric mobility, creating synergies between its passenger cars and commercial vehicle divisions. For example, Deutsche Accumotive—a Daimler subsidiary—provides the batteries for E-FUSO trucks. Mercedes-Benz Energy—a specialist for stationary energy storage systems—offers opportunities for a second lifecycle of the batteries. And Daimler also owns a stake in Chargepoint, the world’s largest provider of charging stations and infrastructure, as well as in StoreDot—an Israeli start-up developing a new fast-charging battery technology, especially interesting for applications in electric trucks with its high charging volumes. (Earlier post.)

Limited range city e-truck is and excellent solution to reduce pollution and GHG.

Those e-trucks could use quick boast charging facilities installed for city e-buses.

Size and weight of batteries could be reduced when 3X batteries become avaiable?

Interesting, but as always with these very partial disclosures the devil is in the details... 300KWH battery giving 350km range may be Ok if it allows "supercharger" speed charging. If we take same 1.2C use by Tesla on their current best in class 100KWH EVs, allowing them to charge at up to 120KW, when SOC allows it. This would allow 360KW charges, very much same as what Porsche claims for its Mission E 800V future EVs at 350KW... Will that be an option here too ? Or will they go even further with 600KW chargers already presented in other heavy duty electric vehicles for ultra fast charging ?