At the Tokyo Motor Show, Mazda is introducing the KAI CONCEPT compact hatchback (earlier post), powered by the next-generation SKYACTIV-X spark-controlled compression-ignition (SPCCI) gasoline engine (earlier post), SKYACTIV-Vehicle Architecture and a more mature expression of the KODO design language. The company is using the opportunity of the event to provide more details into the SPCCI engine, announced in August. (Earlier post.)

The SKYACTIV-X combines the benefits of a spark-ignition gasoline engine—expansiveness at high rpms and cleaner exhaust emissions— with those of a compression-ignition diesel engine—superior initial response and fuel economy. Coming after Mazda’s SKYACTIV-G gasoline engine and SKYACTIV-D diesel engine, this third SKYACTIV engine has been given the new name of “X” in recognition of this dual role.

Mazda believes that there is still ample room for further evolution of the internal combustion engine and that this technology has the potential to contribute in a major way.

Lean burn. Mazda has undertaken a fundamental reexamination of the nature of combustion, with the aim of making some major improvements in the efficiency of the internal combustion process.

The SKYACTIV-G gasoline spark ignition engine boosts combustion efficiency by raising the compression ratio, while cooling losses from the zone of the heat transfer to the chamber wall are reduced through control of cooling water temperatures. Pumping losses and mechanical resistance are reduced through use of the Miller cycle.

In the SKYACTIV-X, Mazda worked to boost the air-fuel ratio by enabling lean burn, in which larger quantities of air are combusted. The ideal (stoichiometric) air-fuel ratio is 14.7:1 Creating a higher air-to-fuel ratio by more than doubling the amount of air raises the specific heat ratio and lowers the combustion gas temperature. This, in turn, reduces cooling losses. Meanwhile, a design that introduces larger amounts of air reduces the losses from throttle closure, resulting in improved fuel economy.

However, the problem is that if this kind of lean mixture of air and gasoline is burned using the flame propagation-based combustion which occurs when a spark plug is used, combustion tends to become unstable.

However, HCCI has not yet reached the point where it can be used in commercial applications because it is only used at low speed and load ranges, and even these ranges are apt to change depending on driving conditions. Furthermore, the very limited range across which HCCI can take place makes it difficult to achieve stable switching between spark ignition and compression ignition. 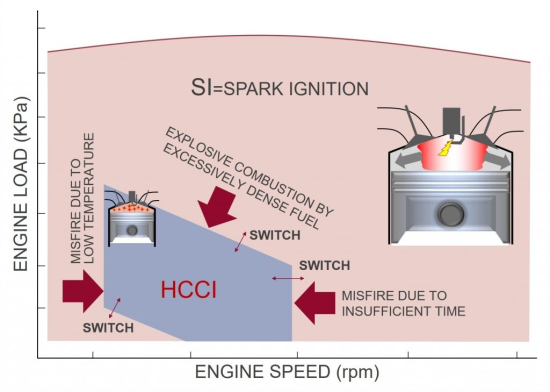 Until now, overcoming these issues had required a major increase in the compression ratio, a more complex structure and the addition of high-precision controls.

SPCCI. The current conventional thinking about HCCI is that while compression ignition itself doesn’t require a spark plug, a spark plug will still be needed in the rpm and load ranges where compression ignition cannot take place. Unfortunately, switching between these two modes is extremely difficult. This condition has hampered the commercialization of HCCI, despite years of work by the auto industry.

Mazda’s breakthrough has been achieved by questioning the conventional idea that no spark plug is needed for compression ignition and suggesting a different approach. Mazda is essentially asking: “If switching between different combustion modes is difficult, do we really need to switch in the first place?” This concept is the basis of Spark-Controlled Compression Ignition (SPCCI), Mazda’s unique combustion method. 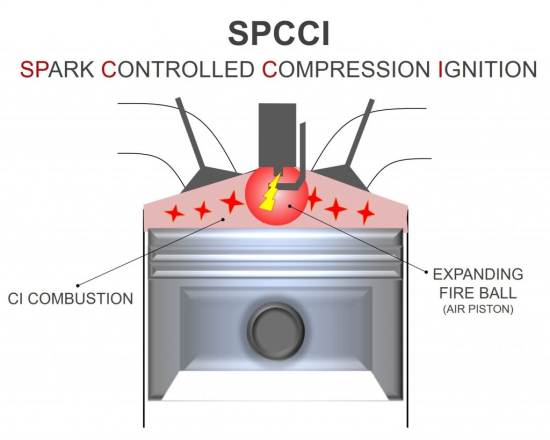 SPCCI is based on two existing functions—ignition and injection—which Mazda has further refined and meticulously recombined. To do this, Mazda has further developed several elementary technologies—a new piston head design and super-high-pressure fuel injection system to support compression ignition, and a high-response air supply which can deliver larger amounts of air—and combined these with an in-cylinder sensor which serves to control the entire engine.

Compared with the complicated structures that were previously required in order to utilize the HCCI concept, the hardware for SPCCI is simple and lean, with no unnecessary complexity.

The SPCCI mechanism can be summarized as a system in which the compression effect of spark-ignited localized combustion is used to achieve the required pressure and temperature to bring about compression ignition.

In other words, the geometric compression ratio is raised to the point where the air-fuel mixture is on the verge of igniting (due to compression) at top dead center. At this point, an expanding fireball created by spark ignition provides the final push that causes the whole mixture to combust.

The timing and amount of pressure required are in a continual state of flux depending on constantly-changing driving conditions. The SPCCI system is able to control the spark plug ignition timing, meaning that pressure and temperature within the combustion chamber can be optimized at all times.

Because a spark plug is used all the time, the system is able to switch seamlessly to spark ignition combustion in rpm or load ranges where compression ignition would be difficult. In this way, the system ensures that the compression ratio is never raised too high, while enabling a simple design which does not require complicated features such as variable valve timing or a variable compression ratio.

Super-high-pressure fuel injection system. To minimize compression time and make compression ignition as efficient as possible, the fuel must be vaporized and atomized very quickly and then immediately dispersed around the whole of the cylinder. The SKYACTIV-X therefore features a system capable of injecting fuel at super-high pressure from a multi-hole fuel injector positioned in the center of the combustion chamber.

This causes the fuel to be vaporized and atomized instantly, while powerful turbulence is simultaneously created, greatly improving ignition stability and combustion speed. Super-high-pressure fuel injection enables SPCCI, which suppresses abnormal combustion even at full throttle/low rpms where traditional gasoline engines have to retard ignition and thus sacrifice efficiency and power.

In-cylinder pressure sensor. In addition to the technologies described above for preventing abnormal combustion, an in-cylinder sensor has also been introduced as a monitoring control; by continually observing whether the above controls are bringing about proper combustion and compensating in real time for any deviations from intended outcomes, it ensures continuously optimized combustion.

Based on the techniques set out above, SPCCI has expanded the zone of compression ignition right into the full throttle range, and enables smooth switching between SPCCI combustion and spark ignition combustion.

This new combustion method does not merely use spark ignition to assist compression ignition, but delivers an all-encompassing combustion control system which includes control of in-cylinder temperature and pressure and control of the fuel injection’s air-fuel mixture distribution density and exhaust gas recirculation (EGR).

Performance and responsiveness. With an engine displacement of 2.0L, the SKYACTIV-X delivers at least 10% more torque than the current SKYACTIV-G, and up to 30% more at certain rpms (data as of August 2017, during the development process). In addition, because the throttle valve is open most of the time, it exhibits the superior initial acceleration response found in diesel engines which do not have a throttle valve. On the other hand, the SKYACTIV-X spins up into the higher rpm ranges as smoothly and easily as a typical gasoline engine.

In a vehicle with a 2.0L engine displacement, the SKYACTIV-X delivers a 20% improvement in fuel economy compared to the SKYACTIV-G. Furthermore, in areas where low vehicle speeds are used frequently, fuel economy can be improved by up to 30% due to the use of super lean combustion.

Compared to the MZR engine of 2008, fuel economy is improved a dramatic 35-40%, and SKYACTIV-X even equals or exceeds Mazda’s latest diesel engine, SKYACTIV-D, in fuel efficiency. With improvements being especially great in the light engine load range, this engine challenges the commonly-held belief that a large engine displacement means poor fuel economy.

The range in which the engine is able to deliver excellent fuel economy has been significantly expanded with the use of the SKYACTIV-X, meaning that this system is able to deliver lower fuel consumption than ever before in a whole range of driving scenarios, including city driving, long-distance driving on expressways and more.

According the drive tests performed by the auto-journalists and published in the Internet,
the Mazda SkyActiv-X does work in practice.

The problem of the SkyActive-X is its over-complexity (and cost).

In comparison,
the PatBam HCCI (more at http://www.pattakon.com/pattakonPatBam.htm ) provides control over the HCCI combustion, being by far simpler and cheaper.