Hyundai Tucson Fuel Cell drivers have accumulated more than three million miles on the roads and highways of both Southern and Northern California. These fuel cell CUVs have emitted only clean water vapor, and by so doing, have replaced approximately 1,140 tons of CO2 emissions that would have been emitted by vehicles of similar size and capability. Hyundai has delivered more than 150 Tucson Fuel Cell crossovers since its introduction as the first mass-produced fuel cell vehicle in the US market in 2014. 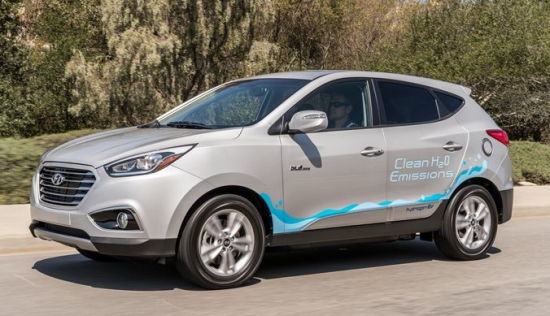 The Hyundai Tucson Fuel Cell CUV has an estimated driving range of 265 miles between fill-ups. Both fuel cell driving range and vehicle performance are minimally affected by either extreme hot or cold ambient temperatures. The Tucson Fuel Cell can be refilled with hydrogen in less than five minutes, about the same time as a typical gasoline vehicle.

It's a very slow start with only a few FCEVs. Just a good real life test for FCEVs.

Hyundai are going to up the numbers to similar ones to the Toyota Mirai when they release the new model in early 2018.

Let's hope that this practical limited test is followed by mass production?

The Ballard cells are in buses, which accumulate mileage fast with their duty cycle, and so have been proven in actual use more comprehensively.

That is no reason to assume that the Hyundai cells in cars will not do just as well.