BCG forecasts electrified vehicles to take half of global auto market by 2030; hybrids to dominate

In a new report (its fourth on electric car adoption) the Boston Consulting Group forecasts that a combination of hybrid and fully electric powertrains will cut the global market share of pure internal combustion engines (ICEs) by about 50% by 2030. ICEs will continue to play a major but changing role in the industry, as most electrified vehicles over time will be hybrids, according to new research by The Boston Consulting Group (BCG).

Three factors—technology, regulatory mandates, and consumer cost of ownership—will shape the changeover, which BCG expects to play out over three phases and about a dozen years: 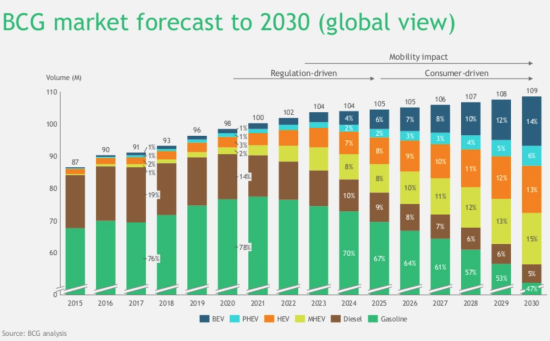 As the transition unfolds, pure ICEs will decline in share from 96% of the global market today to about half of all vehicles around 2030.

The timing of the market’s transition to a new type of powertrain has long been the subject of debate. The prospects for electric vehicles are now clarifying, and the transition period from an ICE-dominated marketplace to a market in which electrified vehicles grow share and BEVs start to compete with hybrids and ICEs is about to commence.

—Xavier Mosquet, a BCG senior partner and lead author of the study

Technological Advances. Three types of technological advances will shape the powertrain future. Through 2020, technological improvements in ICEs should be sufficient to enable the industry to meet regulatory emissions requirements in major markets. The biggest change will be in Europe where diesel engines, which held 48% of the market in 2016, will begin a relatively rapid decline in share toward 36% in 2020, owing to the rising costs of meeting nitrous oxide and nitrous dioxide emissions standards and to “clean” consumer trends that will encourage buyers to explore less expensive forms of electrified vehicles.

At the same time, battery costs, which are the single largest driver of TCO for BEVs and PHEVs, are declining further and faster than projected just a few years ago. BCG estimates, confirmed by several sources, have batteries’ per-kilowatt-hour cost falling to between $80 and $105 by 2025 and to between $70 and $90 by 2030.

The third relevant area of technology is electric power generation. As long as fossil fuels remain the predominant producer of electricity in major economies such as the US and China, the impact of electrified vehicles on climate change is negligible after taking into account the energy required for the production and recycling of batteries. Only when alternative energy sources—nuclear, wind, and solar, for example—become major factors in electricity generation will electric powertrains materially contribute to lowering atmospheric levels of greenhouse gases.

Regional Market Variations. The adoption curve for electrified vehicles varies to some extent by market, depending on TCO, which reflects such factors as the price of the vehicle, the number of miles driven, and gas and electricity costs. In China, for example, the leading market for electrified vehicles so far, high mileage, low electricity costs, and high gas prices combine to give these vehicles a favorable TCO relative to ICE-powered cars and trucks. Government incentives for BEVs have reduced the consumer’s TCO to the point where BEVs actually reached a five-year payback, compared with the TCO for ICEs, in 2015. 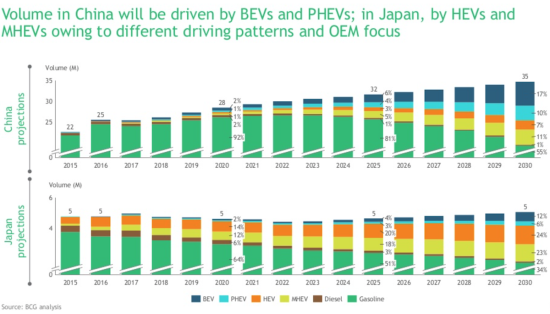 In Europe, the high cost of electricity, along with the relatively low number of miles driven (compared with corresponding figures for China and the US), will continue to make ICEs the powertrains of choice for most consumers through 2025. Market development in Europe will be fairly evenly divided among electrified vehicle types, with BEVs taking a 17% share by 2030 and hybrids a collective 33% share.

The low cost of gasoline in the US will yield similar results. Most of the EV growth will occur in smaller vehicle segments: by 2030, vehicles in the C segment will be almost entirely electrically powered, while ICEs will remain the primary powertrain for pick-ups. Hybrids will dominate the Japanese market, with a collective share of 55% by 2030. 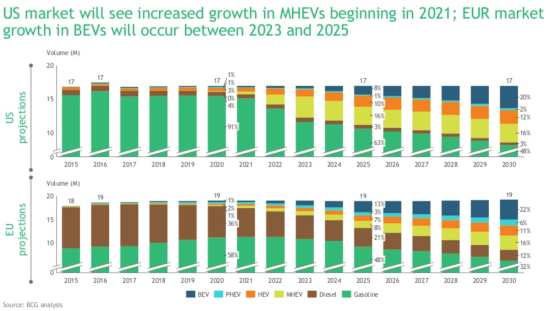 The growth in car sharing, notably with the advent of autonomous (or self-driving) vehicles, will have a significant impact on the adoption of hybrids and fully electric vehicles. As taxis and shared cars drive significantly more miles each year than personal-use vehicles, the payback in electrification will come much faster.

OEMs and their suppliers should keep their eye on two broad trajectories: the rise in market share of electrified vehicles from about 3% today to 50% around 2030, and the increase in share for battery-powered vehicles from almost nothing to about 14% of the global market in 2030. There will be variations in the pace of change, depending on regulatory actions, consumer adoption of autonomous vehicles and car sharing, and the economics of different fuel sources. Companies will need to develop a suite of strategic and product options to manage a transition that is both inevitable in its destination and uncertain as to its route.

A formal BCG report on the findings, titled The Electric Car Tipping Point, will be published in the coming weeks.

Near future lower cost, higher performance, very quick charge (5 minutes) EV batteries may shorten the reign of HEVs and PHEVs and start the progressive end of ICEVs sooner than expected.

New OPGCI engines will extent the life of the ICE for decades to come.

HEV/PHEV will achieve large penetration but EV will be very slow to gain acceptance until battery cost and charge time improves significantly.